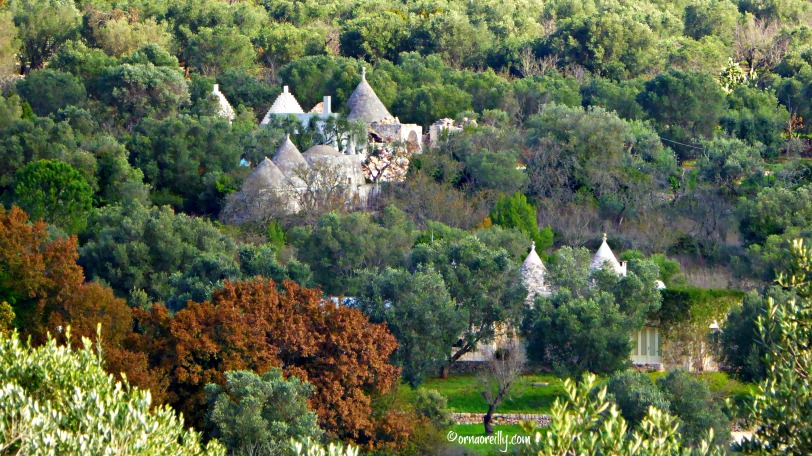 Olive farming? In Puglia? Us? Before we moved south to the region of Puglia on the stiletto heel of Italy, farming of any description was the furthest thing from our minds. We had planned to spend our retirement lounging in the sun beside our pool sipping chilled rosato and blogging about it. So what happened?

As most of my readers are aware, I got married just last July to Tom Weber (The Palladian Traveler). Tom, a confirmed city slicker, had been living in the Veneto for many years and we met just eight months after I moved there from Ireland. It was our blogs that brought us together and we first laid eyes on one another on a visit to Villa Pojana, one of Palladio’s early architectural treasures. The rest is history – or is it?

Wanting a brand new beginning to our new life together, we decided to move to Puglia, the largest olive growing area in Italy. This was not an easy decision as we loved the Euganean Hills where we had made many wonderful friends, but Tom was not keen to live in an apartment any more, and craved some peace and quiet. However, we decided that if the right property became available in either the hills or in Puglia we would consider our options.

Our property hunt began in September 2015. Nothing suitable appeared to be available in the Euganean Hills, but on our second visit to Puglia in January 2016, we saw and fell in love with a property just outside Ostuni, The White City, in the Valle d’Itria. 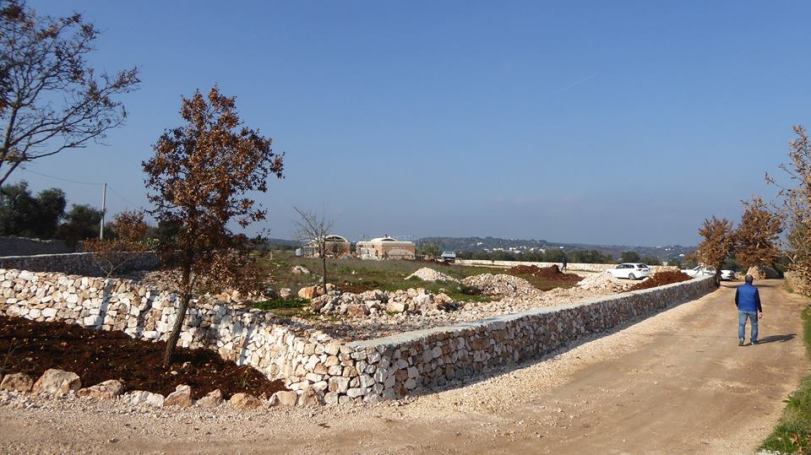 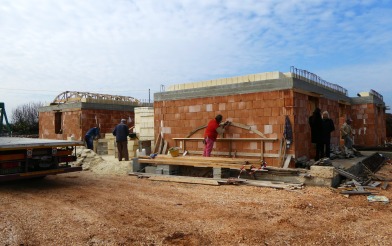 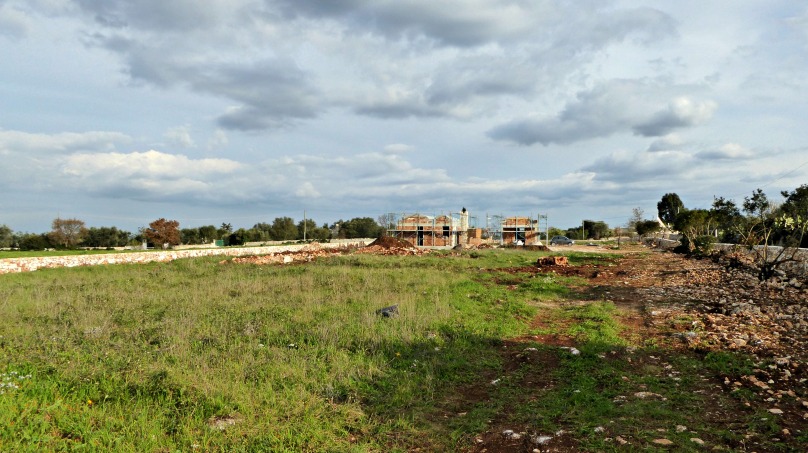 The Valle d’Itria is a tranquil spot, full of pretty olive groves and sprinkled with trulli – those cone-shaped houses typical of the area – with narrow roads and rough stone walls; a little like Connemara with better weather.

The city of Ostuni itself, (population 32,000) has everything one could possibly need to survive comfortably on a day to day basis: supermarkets; a hospital; good shops; top class restaurants, a lively social scene and a stunning centro storico (historic centre) full of winding, cobbled streets. 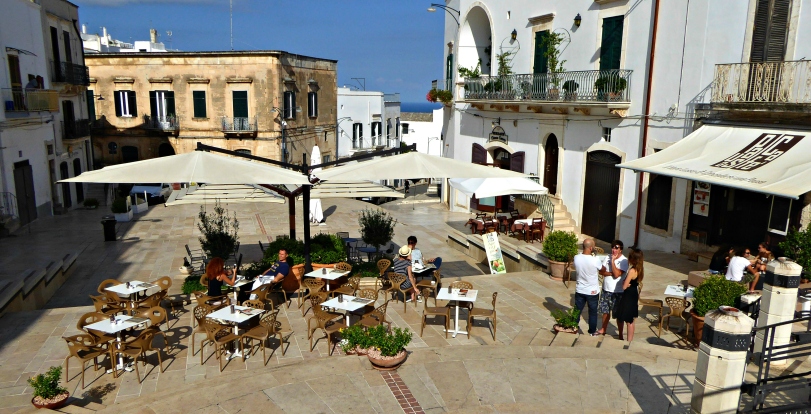 In the early stages of being built, our new home was on a large two acre site on top of a hill with views of Ostuni, Cisternino and Ceglie Messapica on the surrounding horizon. A breezy spot, this plot of rock-strewn land was virtually bare of any vegetation. A few lonely trees, bent by the wind and neglected for years, were the only signs of life to be seen. The plot had no water of its own either, but we were assured that many of the houses in the area relied solely on this vital commodity being brought in by truck and that a large 30,000 litre cistern would be part of our building contract.

Being happy with our decision to buy this potentially wonderful piece of real-estate in Puglia we rushed to sign on the dotted line and Villa Allegra was born. Having been an interior designer for many years, I was put in charge of ensuring that the house was completed to our satisfaction.

We duly paid our deposit and I spent the next eight months flying between Treviso and Brindisi on Ryanair in order to keep an eye on developments with the builder and all the subcontractors. Not an easy task I can assure you, as none of them spoke any English whatsoever and my Italian is pretty dodgy, but I must admit my language skills progressed apace with our new home over that time period.

We began our life in Puglia in October 2016 and our first water delivery arrived.

Our vision? Well you might ask! We were as lost as the Babes in the Wood, having no clue how to manage a two acre plot of bare land in the depths of the Pugliese countryside. Having been assured by the builder and estate agent that our cistern was perfectly adequate, we began to plan our garden. A few olive trees? Some fruit trees? It all seemed so simple. We decided to visit the local garden centre for advice.

The upshot was a suggestion that we plant 80 baby olive trees, which was about 70 more than we had envisaged and much tinier too. Then we were informed (horrors!) that, before that could happen, we needed to get rid of all the rocks as the land was not viable otherwise.

At great cost, we hired an enormous tractor with pulverising equipment on the back, driven by a young lad, the son of the owner, who spent a week moving slowly up and down our two acre plot creating a dust cloud that could well have been visible from outer space.

The result was a virtually rock-free piece of land that looked like the face of the moon and the dustiest house imaginable.

Everywhere we went, on our long exploratory walks along the local narrow lanes, Tom peered into olive groves and bemoaned the fact that Villa Allegra was on such barren land with ne’er an olive tree in sight, though our next-door neighbours’ houses were virtually invisible above the tops of theirs. 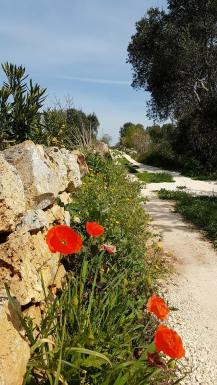 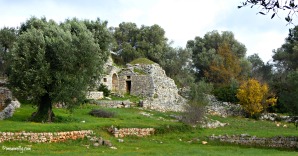 Planting began with 120 laurel bushes to mark out a garden close to the house, which would be visually separated from our baby olive plantation. 25 oleander were strategically planted close to the laurel hedge to add some colour and we then took delivery of 55 olive trees. 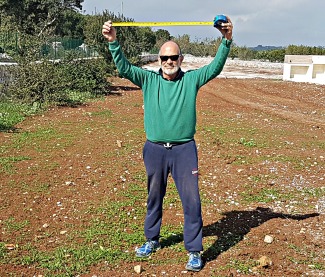 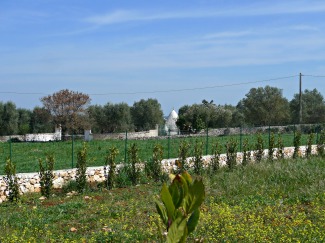 Our builder had, in lieu of the promised landscaping, planted 25 babies, plus a further five of indeterminate age and health, one of which, it transpired, was dead on arrival.

Tom was out in all kinds of cold, wintry, blustery weather staking these little trees and the occasional expletive was to be heard ringing through the olive groves of the Valle d’Itria. In fact, I would say that the air around Tom was often as blue as our shutters, as he staked yet another wind-blown tree. 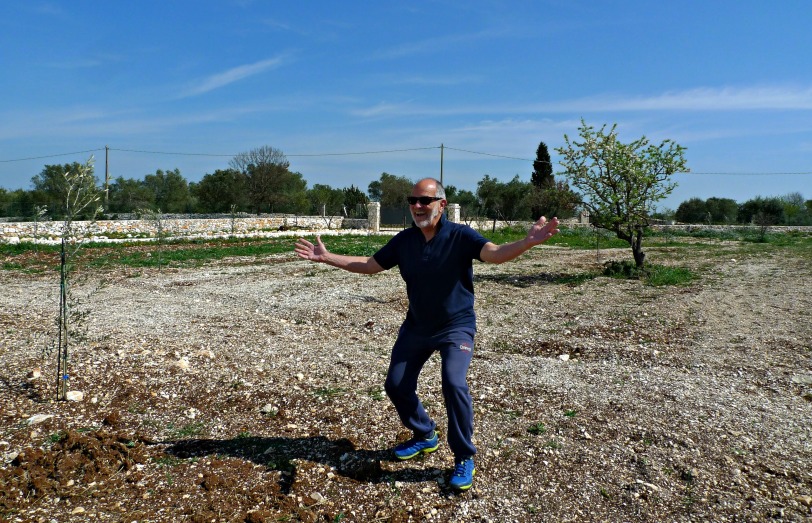 Happily, our olive trees, laurel and oleander weathered the brutally cold January weather we experienced. Airports and schools closed briefly while we endured some shocking blizzards, the likes of which we had not anticipated as part of the normally benign Pugliese climate. 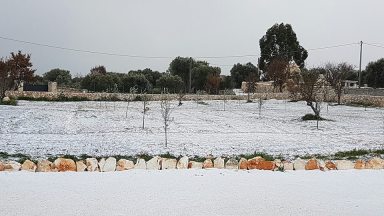 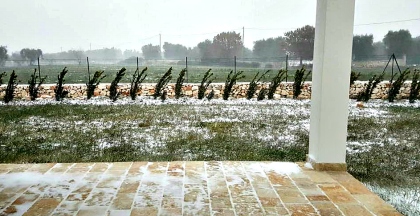 As a farmer, it must be admitted, Tom is not a natural. In the hopes that he might be converted, I bought him a battery-powered weed strimmer for Christmas, which he has used twice so far, and persuaded him to purchase a pair of Hunter wellington boots. A wheelbarrow was added to his tool collection shortly afterwards; a feather-light, plastic, self-assembly one, which he is convinced looks effeminate.

We ended up with 84 olive trees, all of which would, apparently, be thirsty for irrigation as soon as the dry, summer weather arrived. It was suddenly, blindingly obvious that our natty little cistern was inadequate to the task in hand and completely under capacity for our needs. Taking our large pool into consideration and the fact that we wanted to plant lawn around the house, it began to seem like a huge joke.

Finally, the penny dropped and we knew that we needed to sink a well.  Yet more money needed to be spent and lots of it too. This required a permesso (permission) from the local authorities and when it was granted, we sank our pozzo (well) in February. After one week and a drilling operation that entailed digging to 342 metres – of which 70 metres were below sea level – we finally struck precious water.

We were then left to figure out what to do with the unexpected ‘gift’ of about half an acre of grey dust that the machinery had brought to the surface. 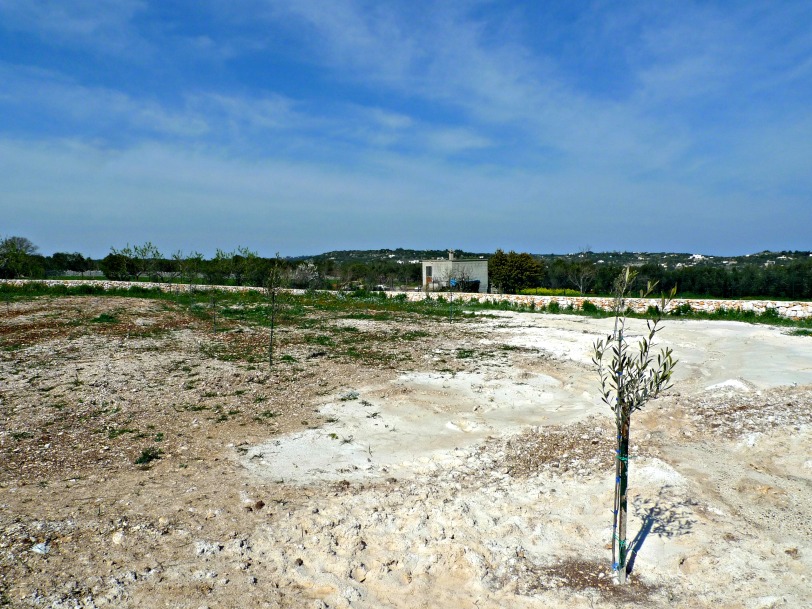 Olive trees planted, we progressed to one dozen fruit trees: apricot; cherry; almond; pear and loquat. We also planted two beautiful magnolia trees to provide some shade, a gorgeous mimosa, lavender on the driveway and a rosemary hedge around the pool. 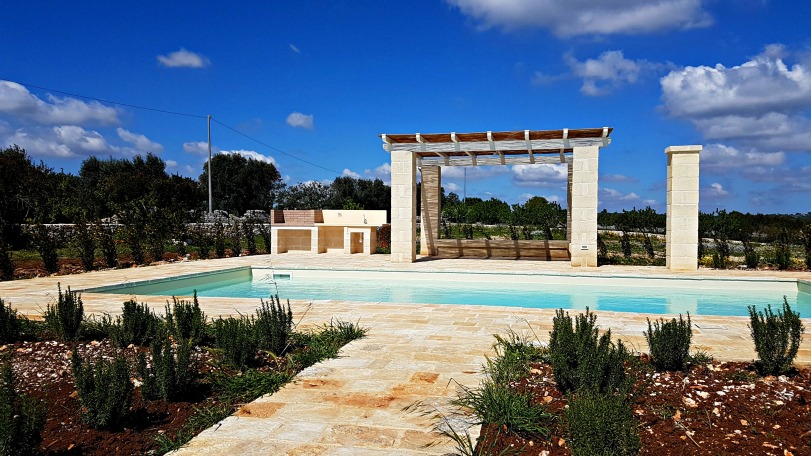 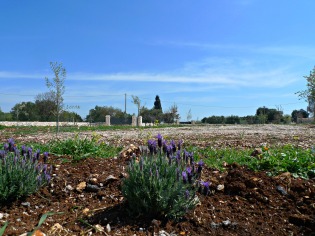 Climbing roses have been ordered for around the entrance gate. Wild flowers have appeared in abundance on our ‘moonscape’ and our ragged posse of indigenous trees have blossomed. Next October we will roll out some lawn around the house and that, hopefully, should finish things off. Until, that is, the next unexpected obstacle rears its head.

Right now, Villa Allegra is ablaze with wild flowers and we are beginning to feel somewhat settled.

As regards farming these olives and fruit in a few years, we hope to engage with a local farmer to assist us in our endeavours. In the meantime, watch this space for further updates on the stresses and strains of being a reluctant olive farmer. Personally I think Tom deserves a medal!

29 thoughts on “The Reluctant Olive Farmer”