Living close to Venice and being a regular visitor there, as those of you who follow my blog will already know, I experienced Acqua Alta for only the second time a few weeks ago. It was a cold, wet day and I had arrived quite unprepared for the high waters that greeted me. I had brought an umbrella, but it had not occurred to me to bring rubber boots. A big mistake!

As I watched with eyes like saucers, the waters of the canals rose, lapping over the sides and into the narrow streets. In many places elevated platforms on steel legs were erected forming busy walkways linking the main areas throughout the city. 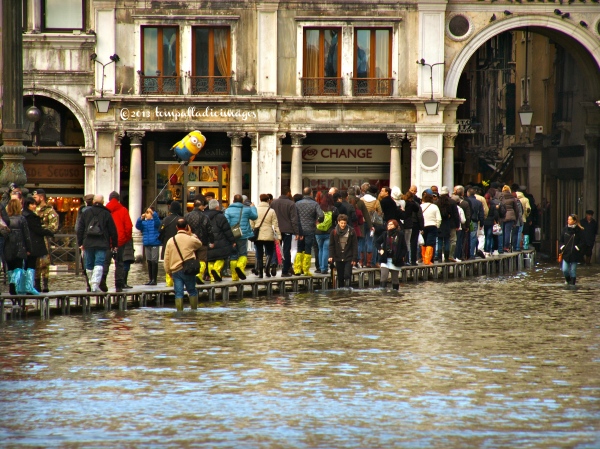 Yellow plastic over-boots (see my previous blog HERE) were for sale in many outlets and seemed to be the footwear of choice for most of the tourists, who seemed to be wearing them. We, my friends and I, purchased a pair each and donning them were able to make our way through the streets without difficulty. 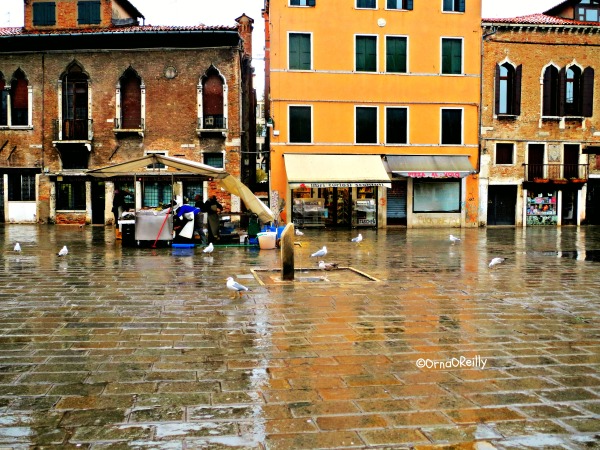 The Venetians themselves, well accustomed to the high tides, which normally occur between October and March, were shod in the smartest rubber boots imaginable. Most of them looked like riding boots, slim and high, into which the fashion-conscious Venetian ladies tucked their skinny jeans.

Stepping up onto the first available platform, we headed for the shops, where it was business as usual, with the locals appearing quite oblivious to the waters lapping around them.

For those of you who do not know about Acqua Alta, it means, literally, “High Water” in Italian. This occurs in the northern Adriatic Sea, but is, apparently, at its peak when it reaches the Venetian Lagoon, which, when combined with the Sirocco and Bora, (two winds which often blow in the area), cause this natural tidal phenomenon to take place. 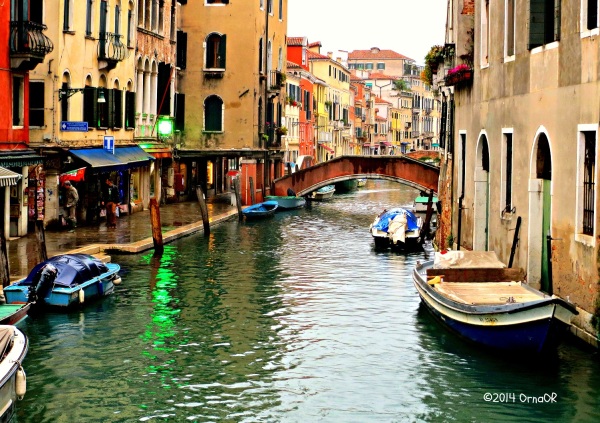 High tide forecasts are announced to the Venetians via the Internet and local newspapers. If a really high tide is expected, along with a risk of serious flooding when everyone needs to be alerted, a series of sirens is sounded signalling the magnitude of the expected tide.

The MOSE project (Modulo Sperimentale Electtromeccanico) is still under construction after several years and as many scandals. It consists of giant flaps hinged onto the seabed between the lagoon and the Adriatic Sea, which will be raised in the event of an exceptionally high tide in order to reduce its effects.

Life carried on as normal for the few short hours of Acqua Alta. Many of the shops and cafes were using suction pumps to get rid of the water which had encroached their premises while customers walked in and out unperturbed. 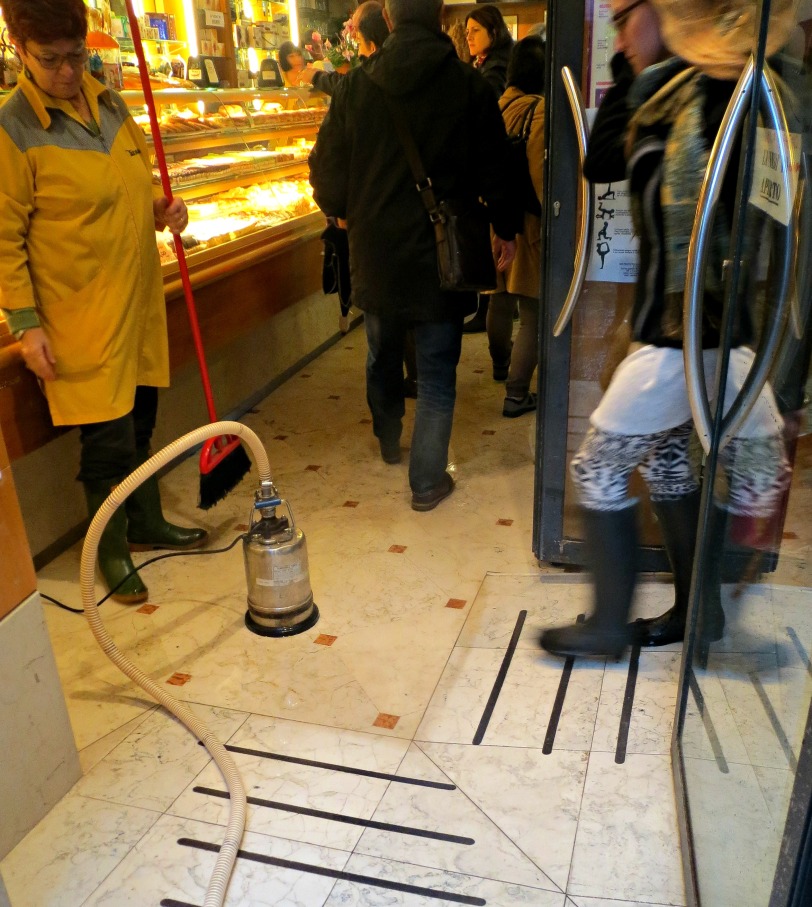 Pumping the water from this pasticceria, but business as usual

Tourists also exhibited a casual attitude to the high waters and continued to queue for the major attractions that this beautiful city has to offer.

Queuing for Basilica of San Marco, Venice, during Acqua Alta

Having sloshed around the waters of Venice in my bright new yellow over-boots and tramped along the hollow-sounding wooden platforms for a couple of hours, I was happy to see the waters subside as I headed for some cicchetti and a welcome ombra. See a previous blog HERE.

Back to the station on the vaporetto