Known as “The Mother City”, spectacularly located Cape Town and its harbour are nestled in Table Bay with iconic Table Mountain in the background and the magnificent Cape Peninsula to the south.

Cape Town is located on South Africa’s southwest coast in a region comprising an extensive coastline, high jagged mountains, plains and valleys. As our African adventure entered its last few days, our next stop after Franschhoek and Hermanus was Cape Town itself. Consistently rated as one of the most beautiful and hospitable cities in the world, we chose it as the venue for our last two nights on the continent of Africa.

Where we visited in the Cape…. 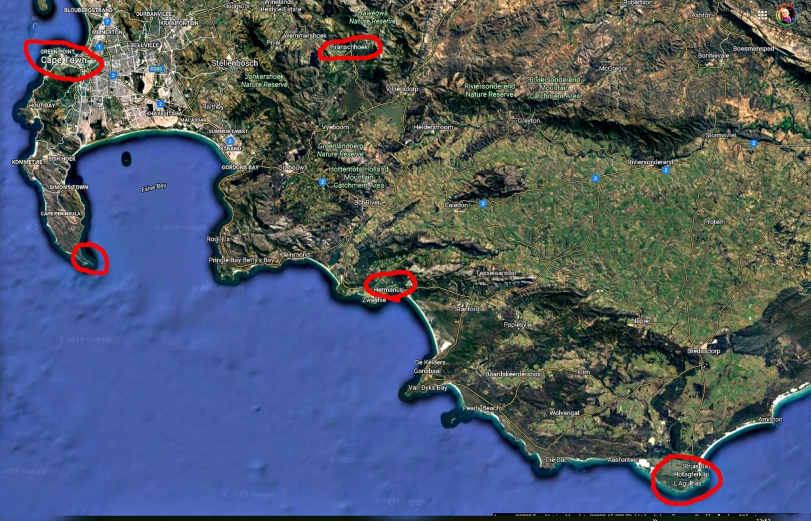 The city of Cape Town was founded by the East India Company as a stopping point for Dutch ships on their way east from Europe. Jan van Riebeeck, a Dutch administrator, arrived there in 1652 and established the Dutch Cape Colony as the first European settlement in South Africa. 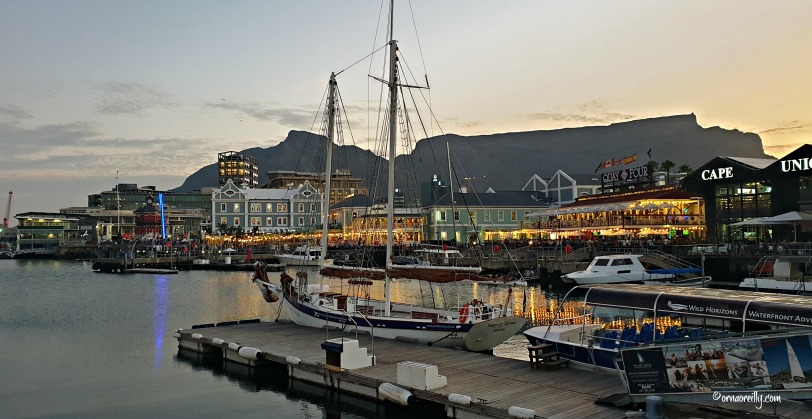 We stayed in an hotel close to the Victoria & Alfred Waterfront, which is a lively spot with a huge Ferris wheel, several bars, restaurants and souvenir shops. 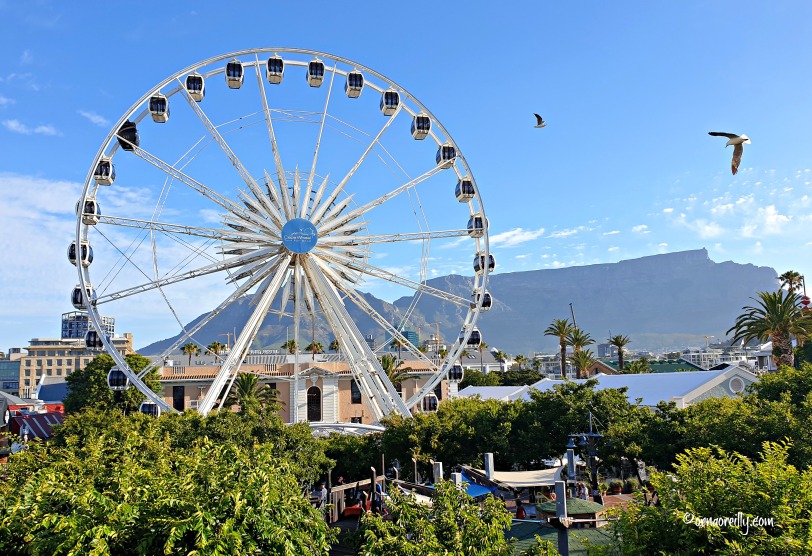 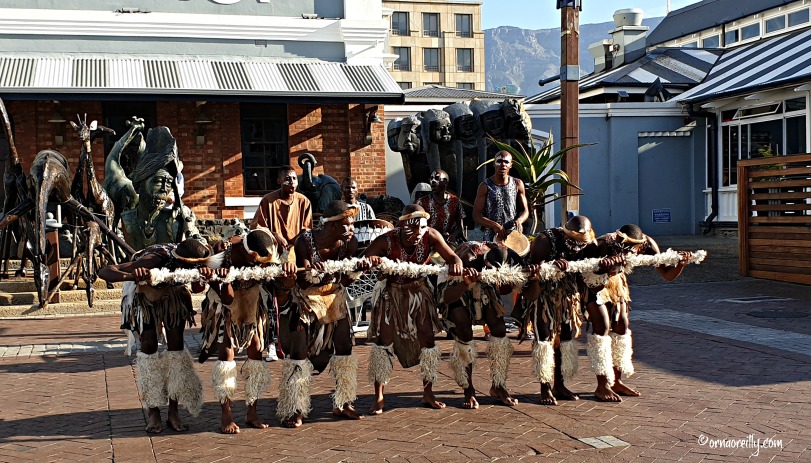 On our first afternoon there, we got a taxi up to Table Mountain which consists of an almost vertical cliff of more than 1,000 metres high. A slowly revolving cable car takes passengers from a lower viewpoint and visitor centre to the flat top of the mountain. 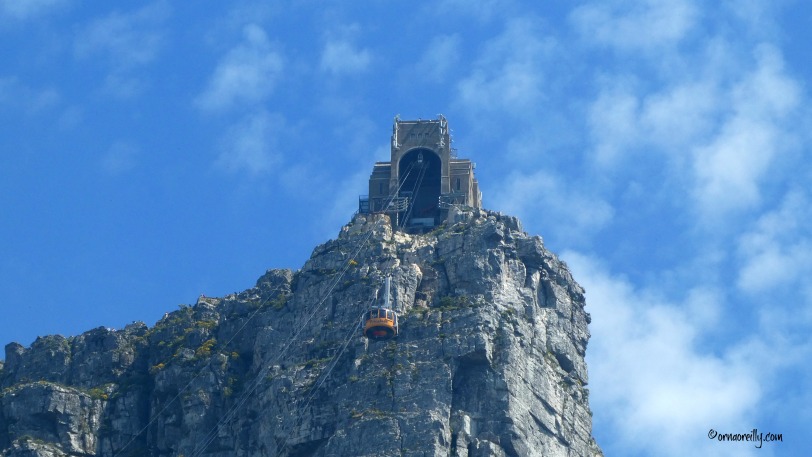 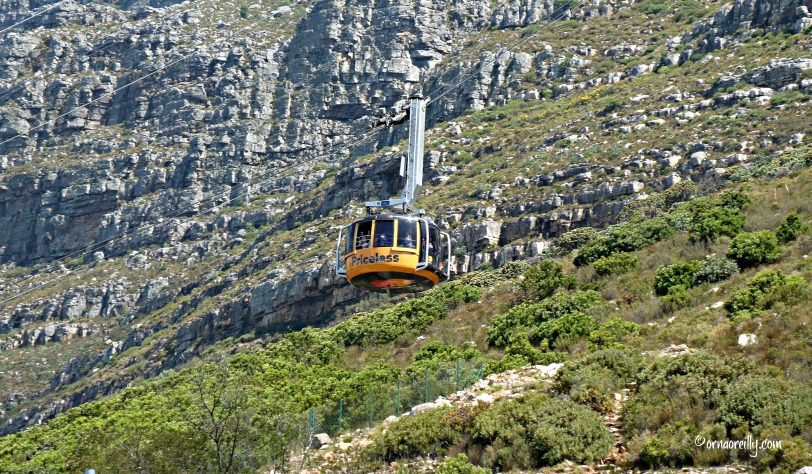 My ever-intrepid husband, Tom, was eager to go to the top, but my colossal fear of heights prevented me from joining him, so he headed up alone. However, I must admit I enjoyed a cool glass of white wine while I awaited his return. The view out over the city and bay was great from the viewpoint. 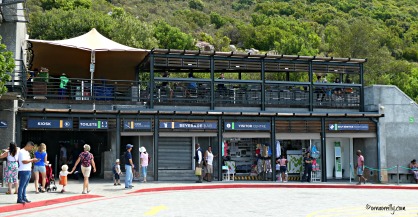 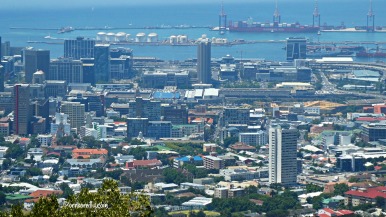 I could see Devil’s Peak on one side and Lion’s Head on the other, so, if cable cars are not for you, it’s no problem at all. On his return, Tom informed me that when he reached the summit, quite apart from the stunning views, there is a gift shop, restaurant and lots of paths wending their way amongst the plentiful vegetation.

In fact, Cape Town has one of the highest levels of plant diversity in the world.  It is estimated that more than 2,200 different species of plant, including many different types of protea, are confined to Table Mountain itself.

While visiting Cape Town, many visitors take a trip by boat out to Robben Island, where Nelson Mandela was imprisoned for many years. Almost 7 kms from land, the island was a prison and leper colony for almost 400 years. It has been a UNESCO World Heritage Site since 1999.  The booking office for the Robben Island ferry is at the Waterfront and needs to be booked in advance. Unfortunately, time constraints did not allow us to visit.

The climate in Cape Town is mild, with plenty of sunshine, though it can be pretty wet during the winter months. In spring and summer, the famous “Cape Doctor” wind blows in from the south east and gets rid of any pollution, hence its name.

No trip to Cape Town is complete without a visit to the Cape of Good Hope at the toe of the Cape Peninsula. When it comes to scenery, the Cape Peninsula is possibly the most spectacular place I have ever seen. It consists of a spine of high mountain peaks trimmed with sandy beaches, beginning just south of the city and ending 40 kilometres later at Cape Point.

For our first day in Cape Town, we booked a guided tour of the Cape Peninsula with a company called Kabura Travel & Tours. Our driver/guide was a very well informed and interesting man by the name of Armand.  Armand picked us up at our hotel at 09.00 sharp and began our trip with a visit to the Cape Malay quarter. Located on the lower slopes of Signal Hill, it is called Bo-Kaap and is full of gorgeously coloured houses. The Cape-Malay people are a South African ethnic group originally from the Dutch East Indies, which is modern day Indonesia. 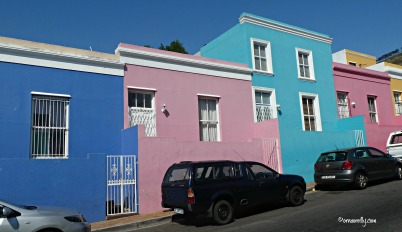 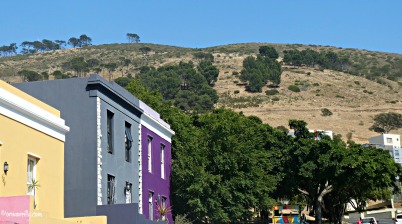 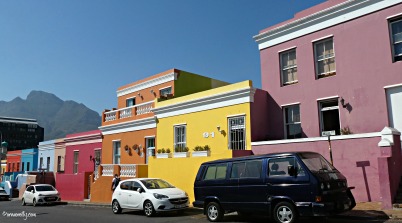 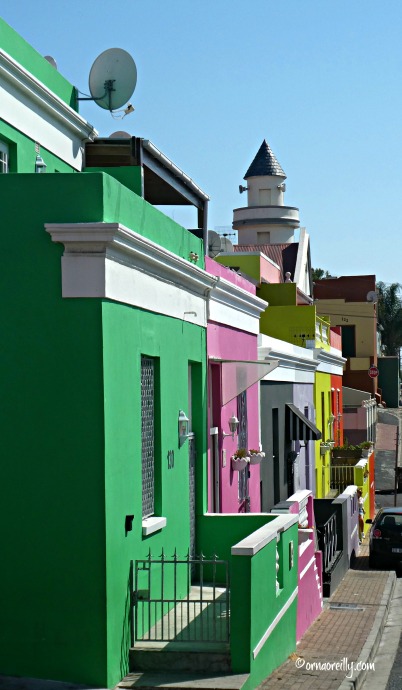 Heading for the Atlantic coast, our first stop was at Maiden’s Cove, from which we had a view of the huge beach at Camps Bay with the Twelve Apostles mountain range behind.

The tour then took us through Llandudno and on to Hout Bay Harbour, where we caught a ferry out to Seal island to visit the local seal colony.

Seal Island, also known as Duiker Island, is actually a series of smooth rocks about twenty minutes out to sea, covered in a vast number of seals. Unfortunately, just after we boarded the ferry, a thick cloud descended and we were enveloped in a chilly fog for the entire journey out and back. Yes, we saw plenty of seals, but we were definitely unlucky that the cloud closed in just then. 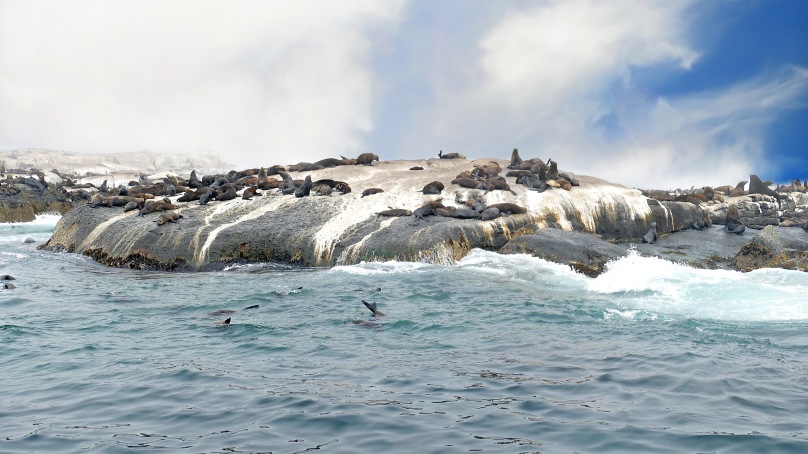 As the Atlantic coast was also covered in cloud at that point, we changed our proposed coastal route and headed inland through Constantia, hitting the coastline of False Bay on the eastern side of the Cape Peninsula north of Simon’s Town. 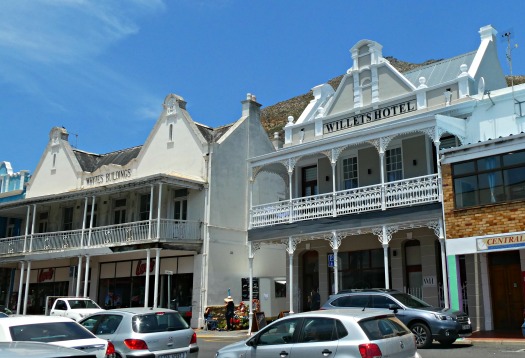 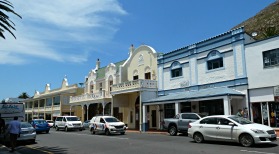 We were very impressed with Simon’s Town and Armand stopped to let us wander around for half an hour. It’s a beautiful Victorian town where the South African Naval Base is situated. From there it was a short drive to Boulder’s Beach…..

…where we saw our second African Penguin colony, having visited Betty’s Bay on the opposite side of False Bay, just a few days previously. As the African Penguin is an endangered species, it was especially wonderful to visit them in their native habitat.

Finally, arriving at Cape Point National Park, passing a family of baboons and some ostriches….

….we made our way to the lighthouse which marks the south western point of the African continent.

Stopping for an excellent lunch at Two Oceans Restaurant….

….from where we had the most fabulous view from our table…..

…..we boarded the Flying Dutchman funicular railway for the three minutes ride to the lighthouse itself. 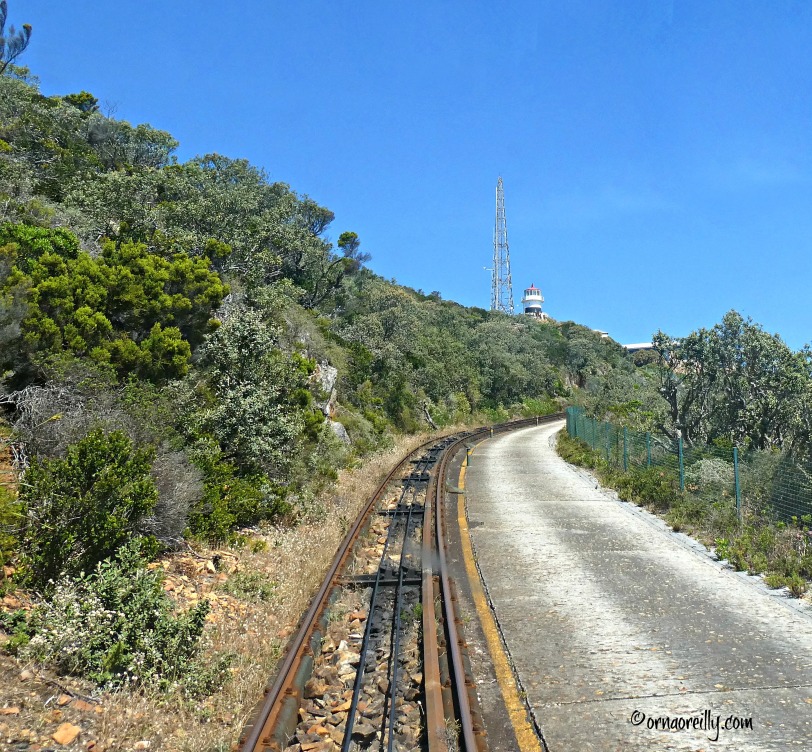 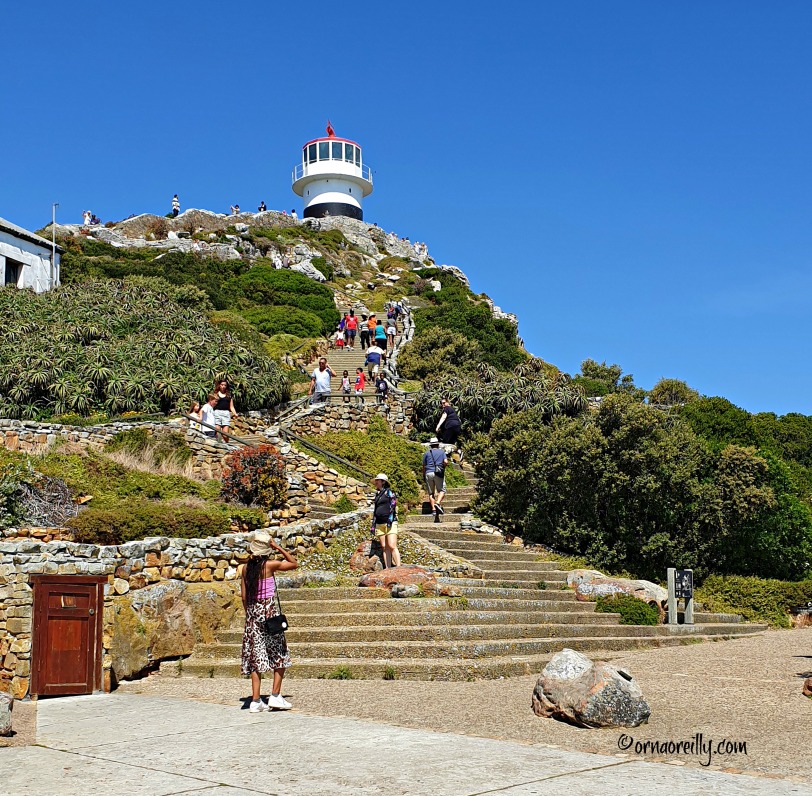 The cliffs here are spectacular, rising to more than 200 metres above the ocean. The view is stupendous, with Dias Beach just below, named after Bartolomeu Dias, the first explorer to round the Cape of Good Hope in 1488.

After our visit to Cape Point, we drove over to the marker for Cape of Good Hope, just to the far side of Dias Beach. Many people believe that this is the most southerly point of Africa, where the Indian and Atlantic Oceans meet, but that honour is actually reserved for Cape Agulhas, which we had visited a few days beforehand.

Marker for Cape of Good Hope

The Cape of Good Hope is also known as the Cape of Storms, being the site of many shipwrecks, and is famous as an exciting and hair-raising part of many international yacht races.

We returned to Cape Town along Chapman’s Peak Drive. This is a dizzying journey with fabulous views across Hout Bay and I was very glad to have our excellent guide, Armand, behind the wheel.

And so, we ended our incredible visit to South Africa. Having spent our first week in Mpumulanga, where we visited wildlife in its natural habitat, to the Cape, where the beauty and diversity just took our breath away.

Lifting off from Cape Town to begin our journey home to Italy, we vowed to return.