A Stroll Through Locorotondo; The Round Place 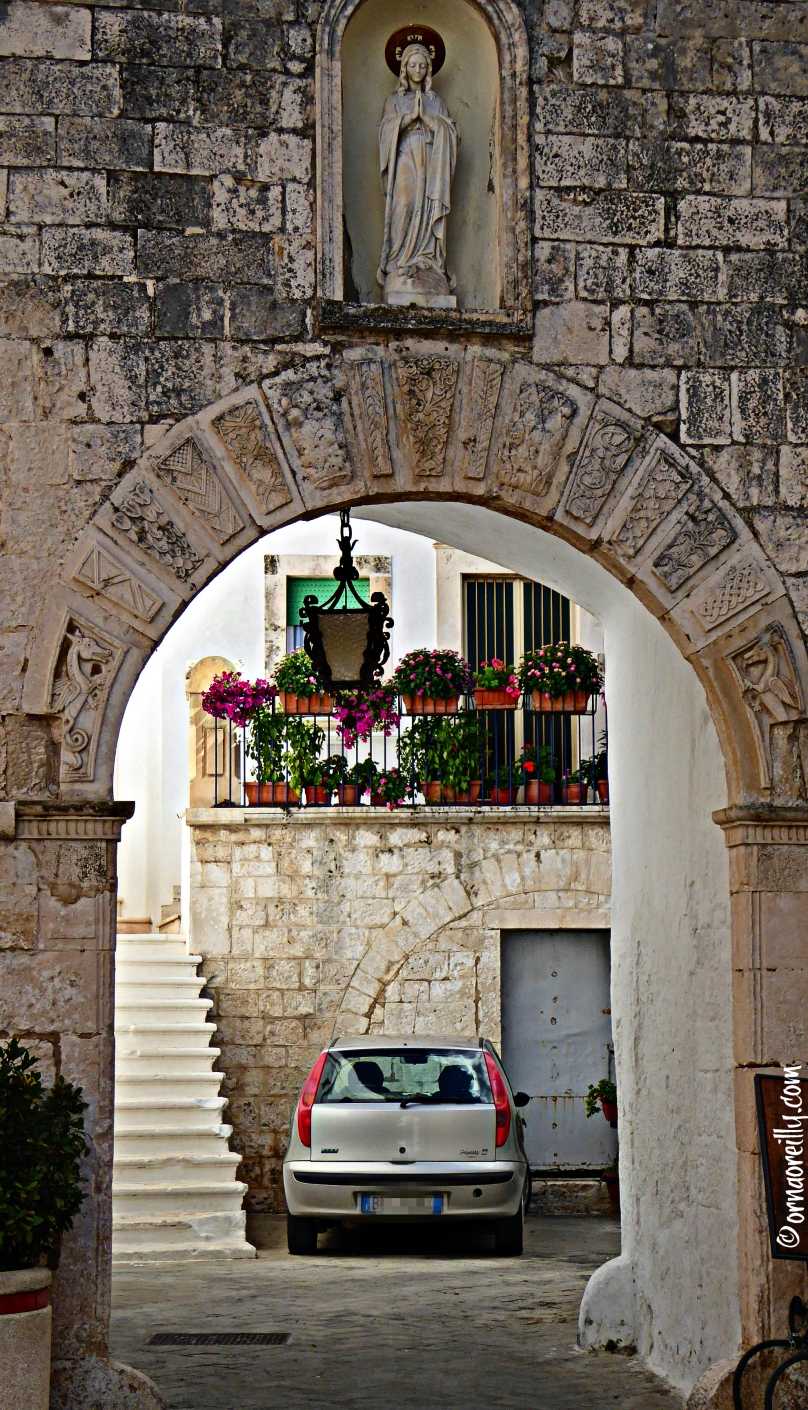 North of the White City of Ostuni, on the limestone plateau of the Murgia, you will find the Valle d’Itria (Itrian Valley), sprinkled with trulli and low stone walls. As we drove through the verdant hills, with the Adriatic Sea a deep blue below us, we discovered the pretty little town of Locorotondo. Classified as one of the Borghi Più Belli d’Italia (Italy’s most beautiful towns), it definitely lives up to its reputation.

Surrounded by vineyards and olive groves, Locorotondo has been settled since ancient times.

There have, apparently, been archaeological finds here from as far back as the 7th century BC.  The town itself dates back to 1,000AD and was ruled by the Caracciolo family, feudal lords, until the beginning of the 19th century.

For those who like their facts and figures, Locorotondo is situated in the commune of Bari, Puglia, and has a population of around 14,000. Apart from being famous for being beautiful, it is also well known for its DOC wines and for its circular centro storico (historic centre), from which the name Locorotondo, (round place) derives.

As we strolled through the charming, well-maintained little streets we passed by tall, narrow white houses with steeply pitched roofs. These unusual homes are called cummerse and are peculiar to the centro storico of Locorotondo.

These slim, angular buildings predominate the centre of this round town, attractively interspersed by Puglian-style baroque palaces and homes. 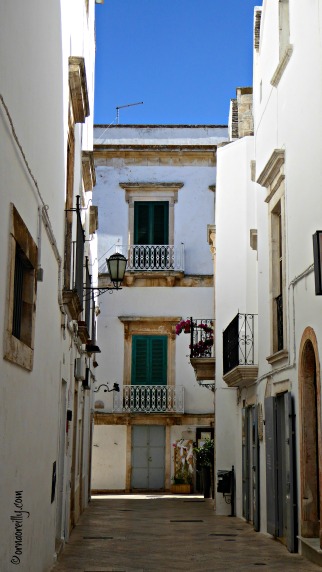 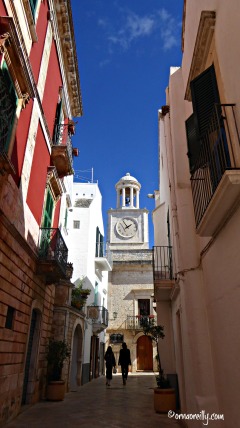 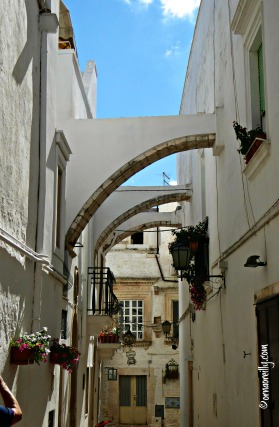 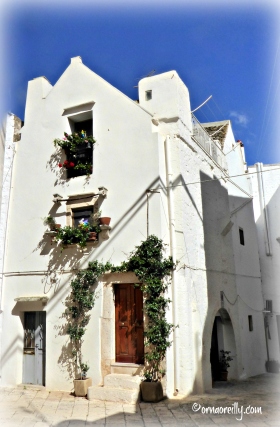 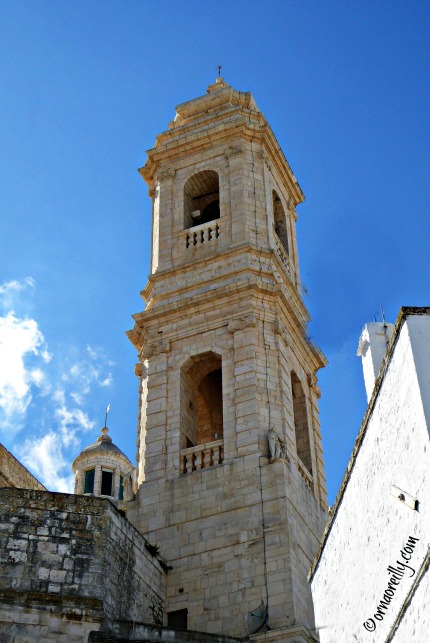 We wandered inside for a closer look and were not disappointed. It is superb. 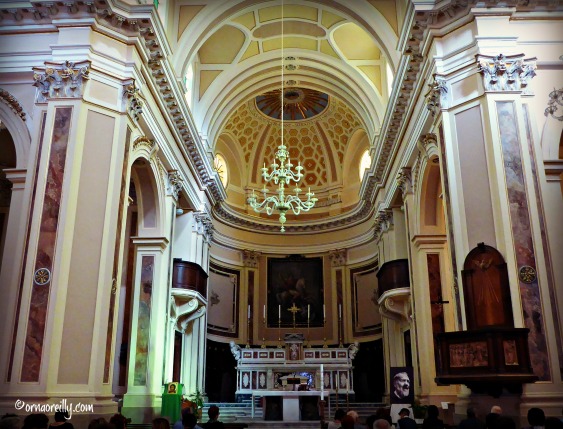 Lunchtime called! We spotted some people having lunch under an arch and began to feel peckish. 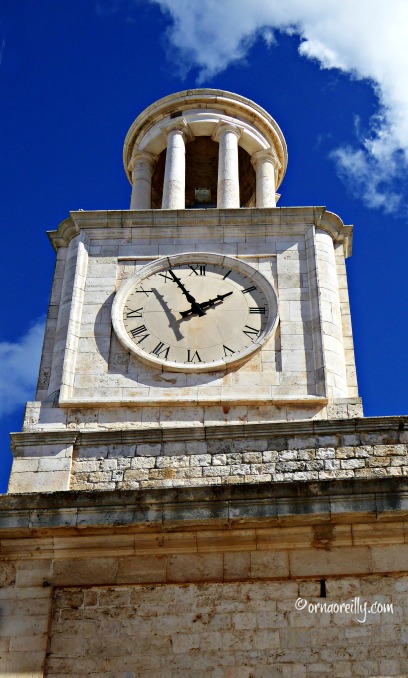 We found a restaurant called U’Curdunn where we ate the most traditional dishes possible. I had orecchiette with polpette (meatballs) and my companion had il puree’ di fave e cicoria (pureed fave beans and chickory). All washed down with Cardone Prosit, a sparkling white local wine. 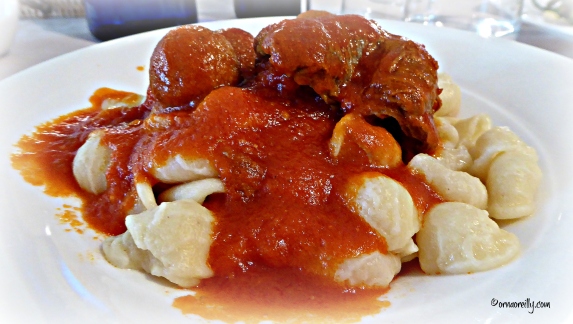 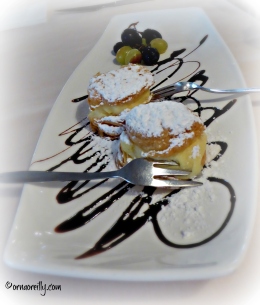 We also ate a sinful and delicious dessert; a type of mille foglie filled with creamy custard. To die for!

The comune (municipality) of Locorotondo produces a white DOC (Denominazione di Origine Controllata) wine with a minimum alcohol percentage of 11%. It is made either still or sparkling. The DOC includes 1,650 hectares of vineyards of Verdeca and Bianco d’Alessano which make up approximately 50/50 of the blend.

Relaxed after our all-too-brief visit, we continued on our journey of discovery around beautiful Puglia.

You can reach Locorotondo by flying into the airports of either Bari or Brindisi from most European hubs.

12 thoughts on “A Stroll Through Locorotondo; The Round Place”