I have just returned from three wonderful days in Romagna where I was invited to join eight other bloggers for a traditional Romagna-style cookery course and local familiarisation visit. This in itself was very exciting for me, an avid tweeter and blogger, as it gave me an opportunity to meet some of my virtual friends in person. 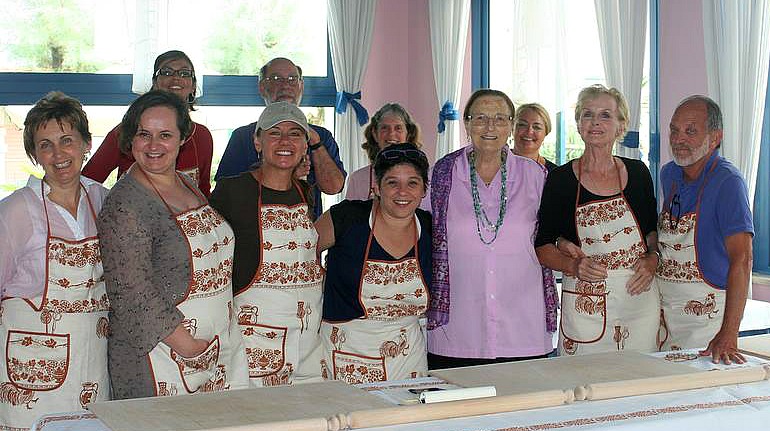 For those of you who don’t know, Romagna comprises the south eastern part of Emilia Romagna and is renowned for its magnificent beaches and fabulous food. 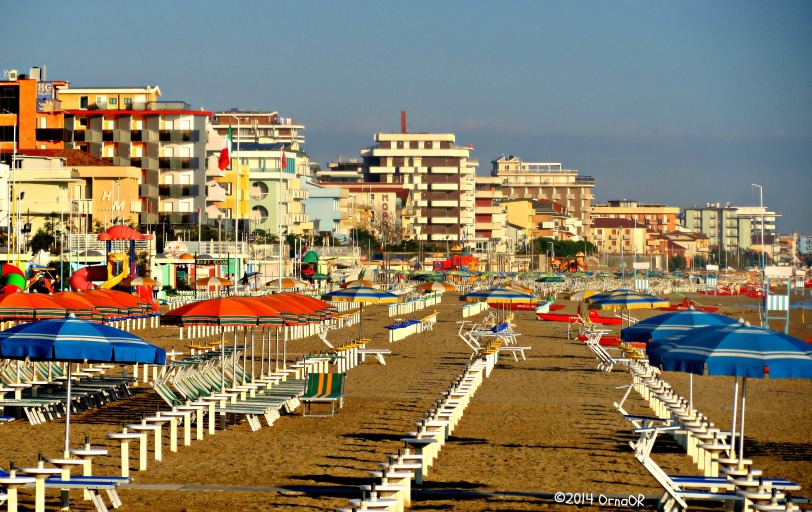 In keeping with the fabulous sea, sand and good food scenario, we assembled at Hotel Eliseo in Igea Marina, Bellaria, just north of Rimini on the Adriatic Sea. This is an immaculate, family-run hotel that sits on the lungomare fronting the most pristine of beaches, with the added bonus of having the wonderful Nonna Violante in charge of the kitchen. Violante gives cookery classes and refers to all her students as “bambini” –  even if their days of childhood are long past! Nonna Violante cooks in the traditional Romagna style with recipes created generations ago. She emphasises how important it is to keep food simple, with top notch, fresh ingredients.

On arrival, we were greeted by the local tourist organisation and “persuaded” to sample some of the local wines, piadina and freshly caught mussels. 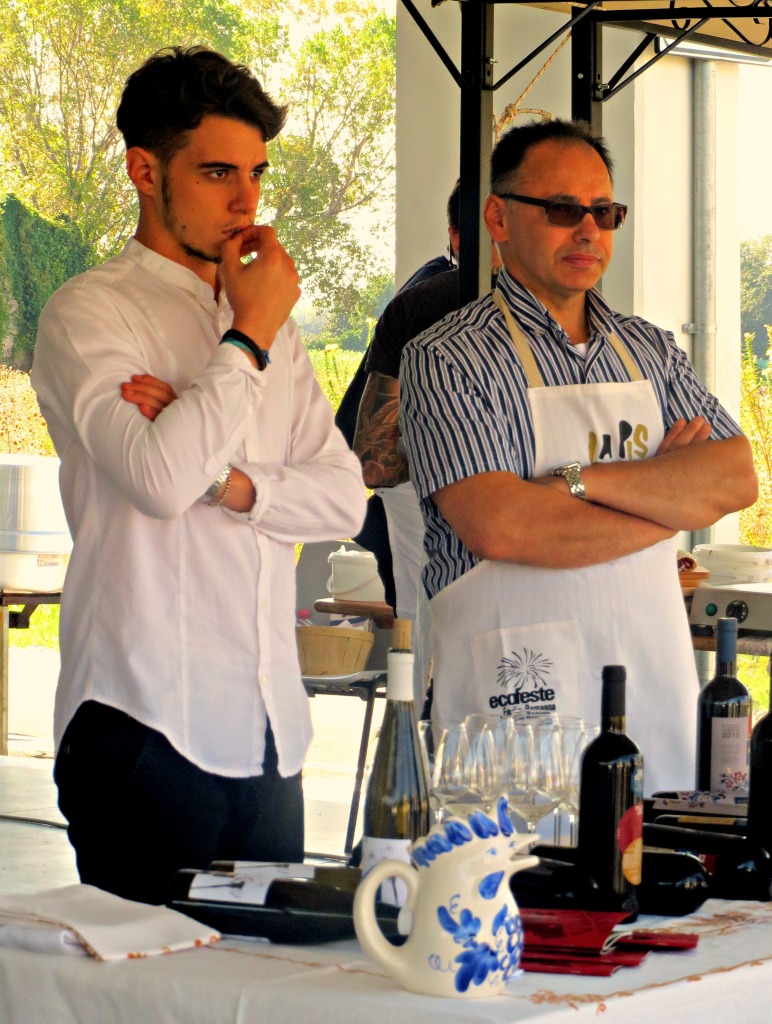 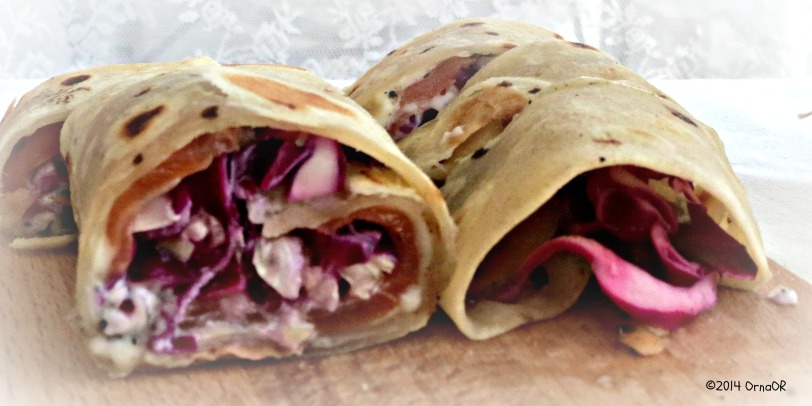 We were then escorted, heads spinning slightly, on a sunny walk to visit Bellaria’s Saracen tower, which houses a fascinating shell museum.

Our cookery classes were scheduled to take place every afternoon for three days. We would be learning how to prepare typical, traditional Romagna style dishes under the tutelage of Nonna Violante, whose unparalleled cooking has put Hotel Eliseo on the culinary map of Bellaria.

We made three different types of pasta; one on each of our three days under the benevolent gaze of our new Nonna. In our very first class we made tagliatelle with ragu: Nonna Violante’s special meat sauce which included beef, pork, sausage, rabbit and a medley of vegetables. 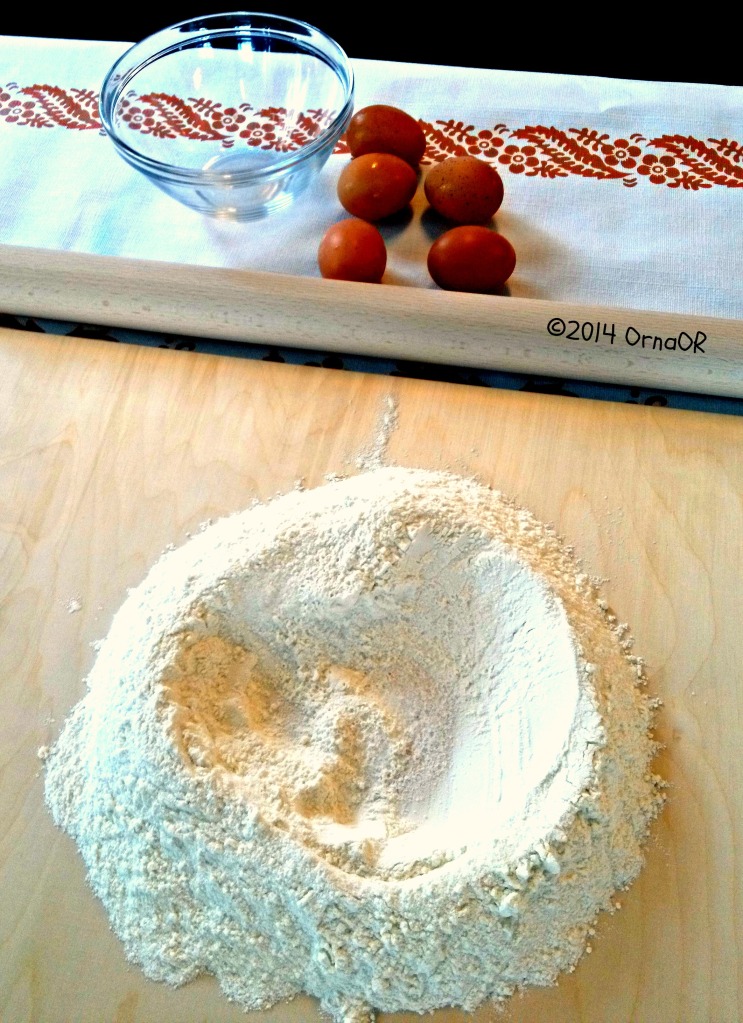 Making pasta the traditional way was a big surprise. I had thought that pasta was casually rolled out and pushed through a machine, where it emerged in long strings on the other side. This would be accomplished while, perhaps, sipping an aperitivo or two. Not so! I have obviously watched far too many TV cookery shows as it was actually pretty hard work.

Once the farm-fresh eggs with their remarkably orange yolks had been mixed with the 00 flour, it was a matter of kneading it for what seemed like an eternity. I was instructed to put my entire body weight into this process until my arms ached. This was followed by my pathetic attempts to roll it out. Nonna Violante and her crew had no problem in turning a small piece of yellow, sticky dough into a carpet-sized piece of pasta, where mine remained unmalleable and pathetically tiny, no matter how hard I rolled. 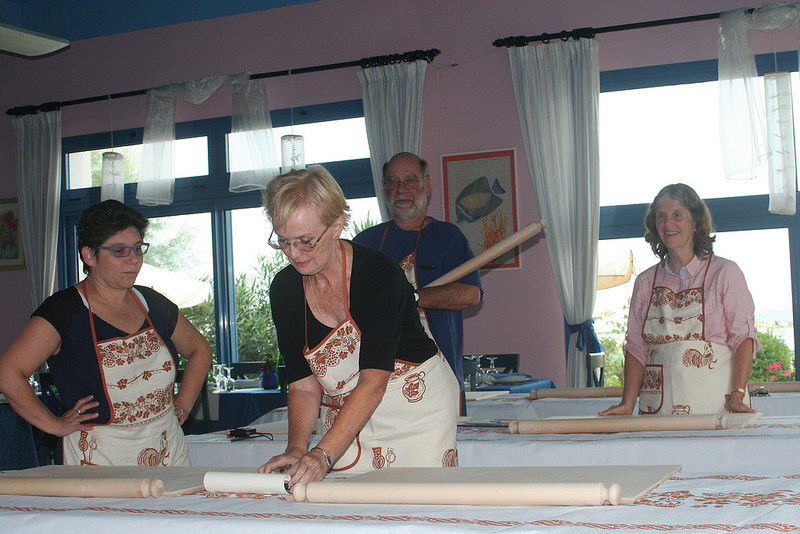 Not so easy! Photo courtesy of Chris Faron http://www.4theloveofitely.com

Strozzapreti was on the menu for day two. Translated literally, strozzapreti means “priest stranglers” but, I am happy to relate that no clerics were harmed in the making of this great pasta, only various egos as some bloggers among us struggled to hand-roll the slices of pasta into the twirly pieces that we were expected to produce. These were accompanied by a delicious clam sauce.

Our third pasta was called passatelli. Quite different in texture, passatelli is made from breadcrumbs, Parmesan cheese and eggs. This blend is then pushed through a cooking utensil with holes. (I have one of these pieces of equipment at home that I use to mash potatoes; being Irish, this is obviously a treasured possession). The passatelli was then cooked in chicken broth and tasted pretty spectacular. 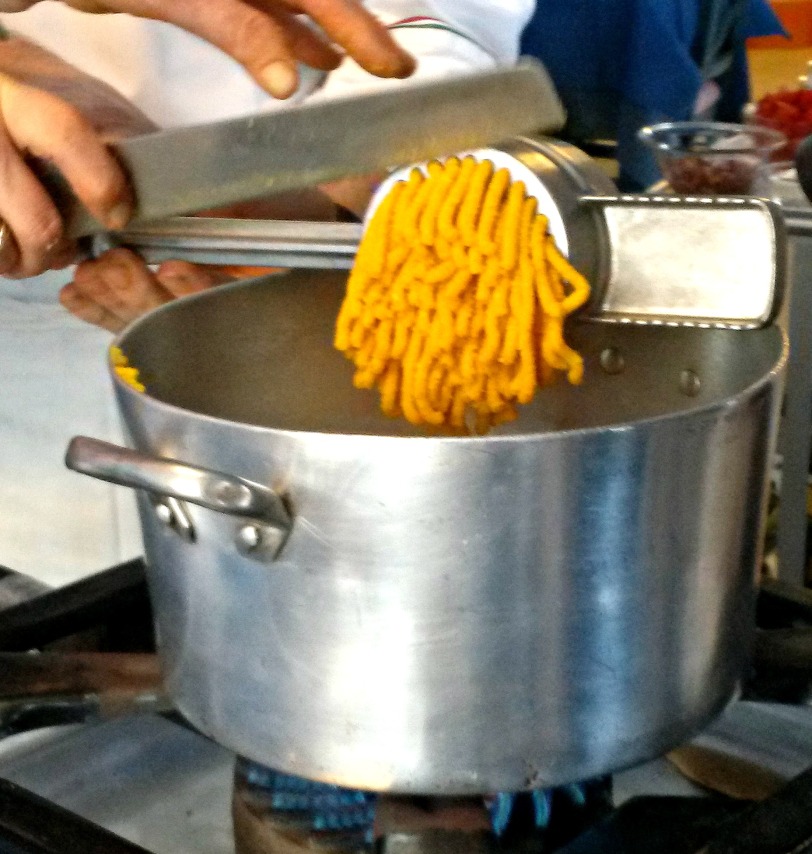 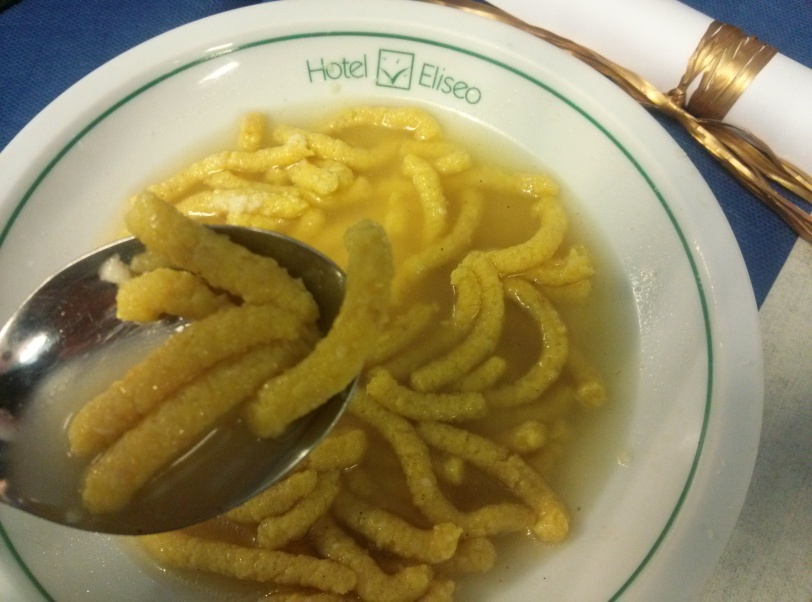 We also made Piadina Romagna, which has become a big favourite of mine. When I arrived in Italy and spotted them in the supermarket, I had no clue what they were. Now I couldn’t survive without a packet of them in my fridge to make delicious sandwiches and wraps. We also made cassoni, which is a piadina folded over and filled: ours were bursting with spinach, garlic and Parmesan cheese. Delicious! 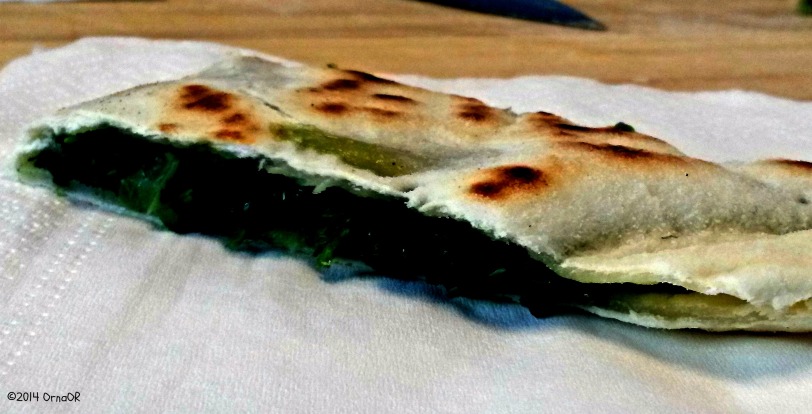 Looking around the hotel dining room where the classes were held was highly entertaining. Bloggers and Tweeters cannot concentrate on anything for long without taking photographs and Tweeting. Every dish we ate and every bottle of wine we saw was photographed and sent out into the stratosphere en masse. And I thought that I was the only one with this annoying habit!

Making pasta and tweeting; at the same time! Courtesy http://www.4theloveofitaly.com

That first evening we were treated to a fabulous dinner and were serenaded by a lively group of musicians. Most of us found ourselves being twirled around the floor by the local troubadours, doing traditional Romagna dances which involved a great deal of clapping and stamping. 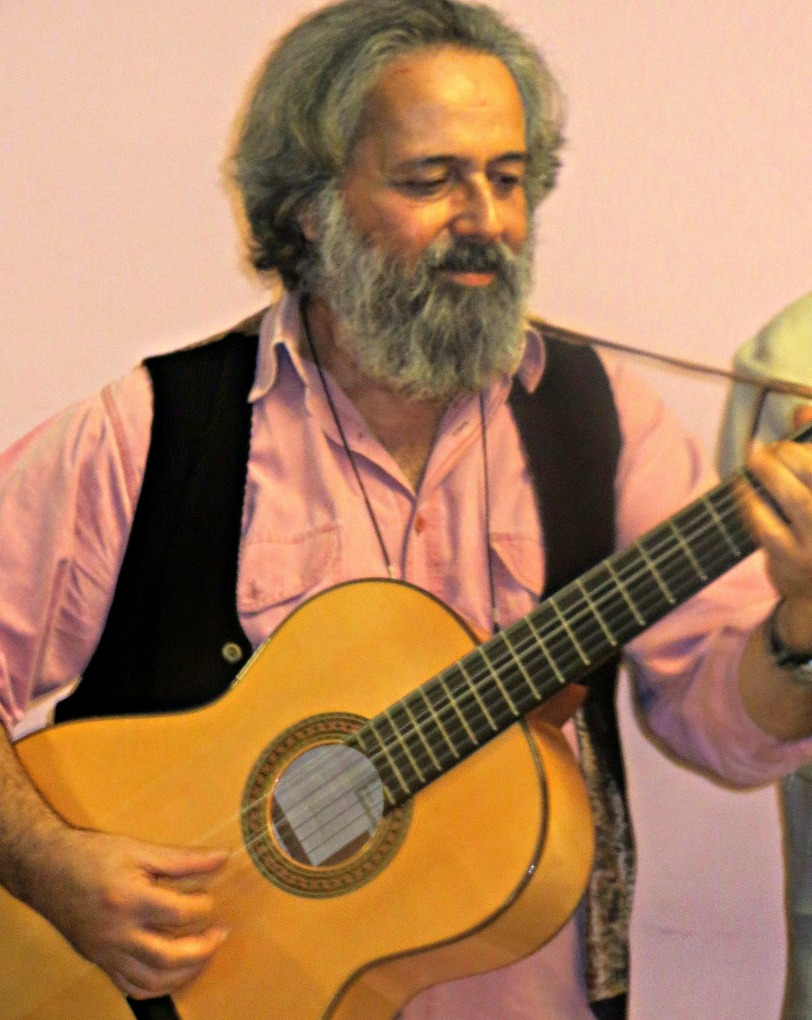 Next morning I managed to take in a long, long walk to try to burn off the million or so calories I had consumed the previous day. The beach at Bellaria is wonderfully flat, bordering a calm sea, topped off with a baby blue sky. As it was the end of the summer season, the lifeguard stations were being carefully dismantled for winter as we walked past on the quiet sands.

Next evening, after a strenuous afternoon making the aforementioned strozzapreti, Romagna style chicken and delicious pears in Sangiovese wine:

…..then eating them at dinner time, we were collected by bus and taken for a night-time visit to the nearby medieval town of Santarcangelo di Romagna. I’m not really a great person for visiting dark, underground caverns, especially at night, but seeing the brave, stoic faces of my fellow bloggers I decided not to opt for sitting on a peaceful bench while the others explored underground. No. I decided that I would do my duty as a blogger and venture down into the depths too. It was pretty spooky, to be honest, but fascinating to see how so many inhabitants of Santarcangelo actually lived hundreds of years ago. Our guide was extremely well informed and made the entire visit to this beautiful town well worthwhile. I need to go back there someday soon and see it in daylight. 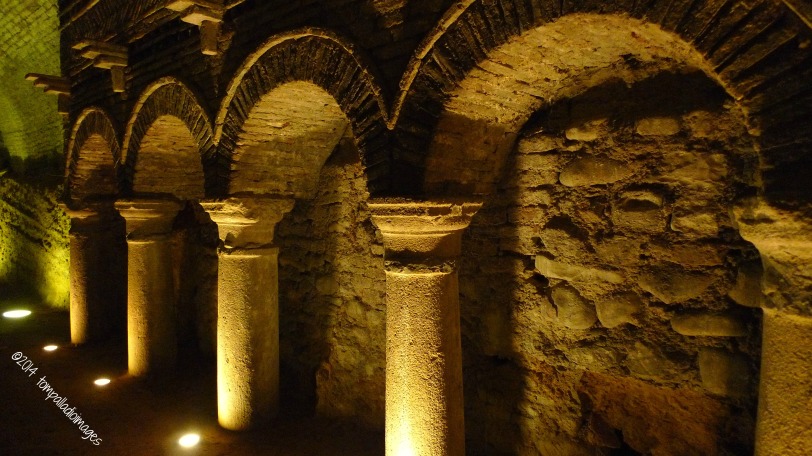 And for any of you who have a button fetish, there is actually a button museum in Santarcangelo too.

Next morning, it was off for another huge walk along the sands of Bellaria. This time we explored the port and were not disappointed. Fishermen sold their fish as their boats languished in still waters. 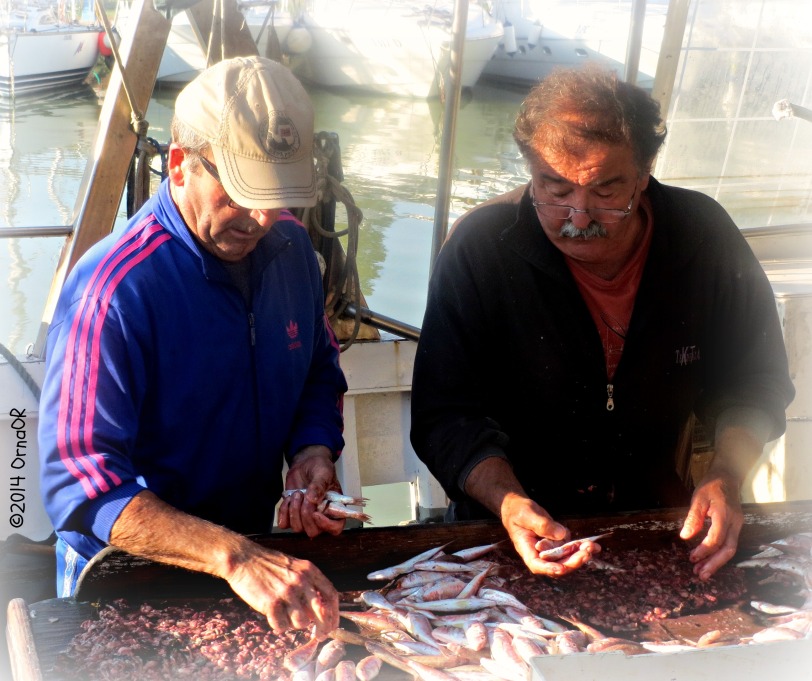 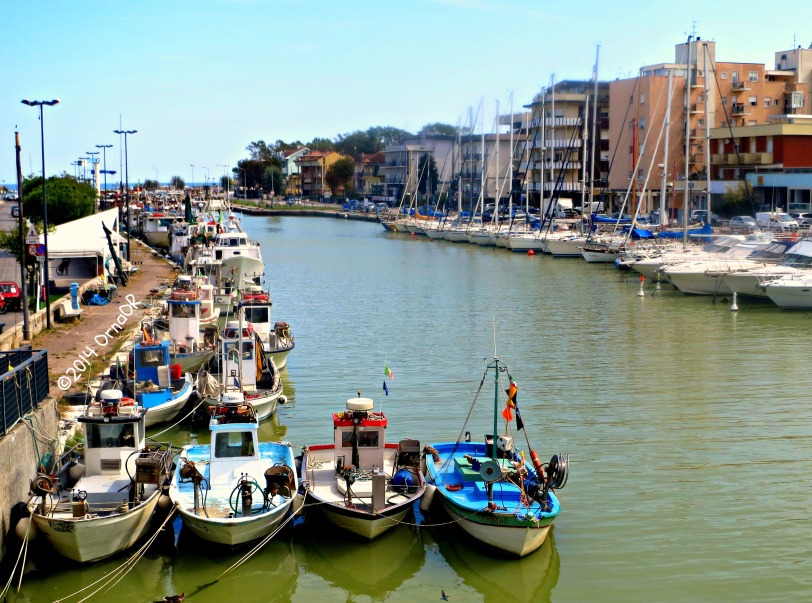 Back for lunch, followed by our final cooking lesson. This time it was passatelli, mullet soup and Cacciatora style rabbit. We followed this by cooking fruity yellow biscuits called Offelle dei Malatesta and learning to stew fruit properly.

During my visit, I chatted with the owner – Nonna Violante’s daughter – Bernardetta, who runs the hotel. I was interested to hear the minutiae of running a family hotel year in, year out. She told me that the hotel closes in late September and everything is then taken out and washed. Curtains, blankets, bed-covers and so on are all freshly laundered and stored for the winter in the sunny south facing bedrooms. All this cleaning up takes about two weeks after which Berndardetta becomes a normal housewife again, eating dinner with her husband and family for the first time since springtime. Then, at the end of April, it all begins again, as it takes at least two weeks to prepare the hotel for the summer. Families return year after year and are the mainstay of these small hotels on the Adriatic coast.

However, the wonderful food is, undoubtedly, the thing that makes this hotel extra special, with Nonna Violante’s cookery classes an added bonus for those who want to experience the truly traditional flavours of this, the culinary heart of Italy, which is Romagna. 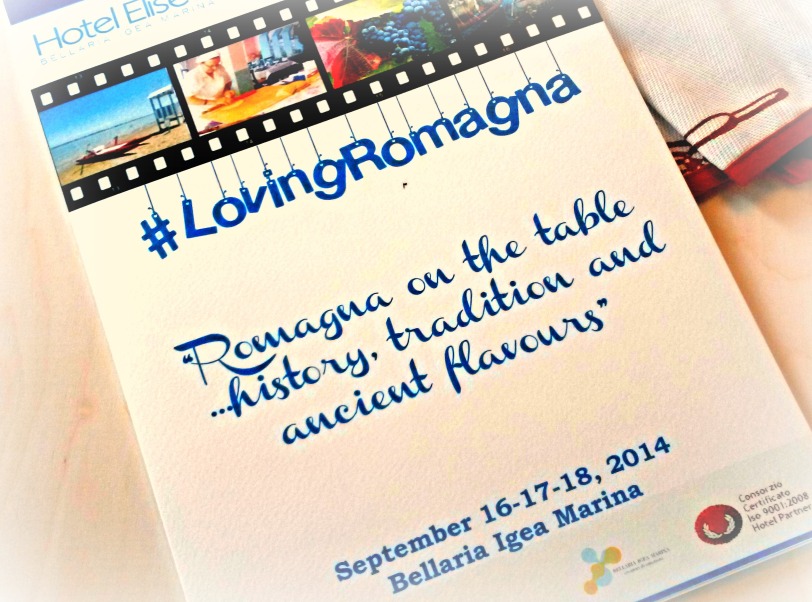 6 thoughts on “Sand, Sea and Strozzapreti”