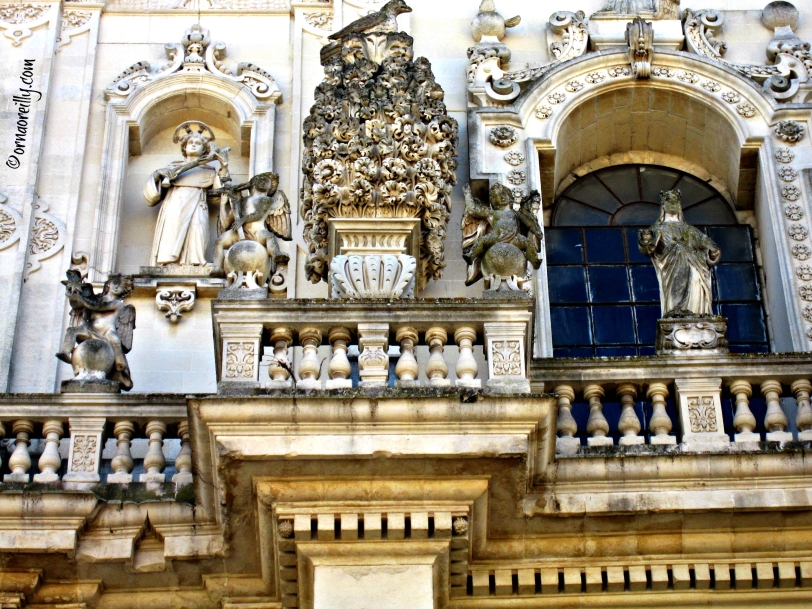 Stepping out of the jet that had transported me to Brindisi, right down south on the heel of Italy, I lingered for a moment to inhale the sweet, warm October air and to enjoy the sunshine teamed with the bluest of blue skies. I had arrived for a week in Puglia and my first stop was the baroque city of Lecce where I planned to spend two days sightseeing.

Side street in Lecce

I was just in time to catch the noon bus and was met one hour later in down-town Lecce by my charming hostess Elisabetta, the owner of Roof Barocco Suite. Negotiating our way through the narrow streets I found myself outside a large, cream and beautiful building where she and her family live.

Unlocking a huge wooden door, Elisabetta escorted me up a flight of stairs to the rooftop. There was my room, like no other Bed & Breakfast I had ever seen, with a 360⁰ view of the heart of Lecce’s centro storico. (historic centre). 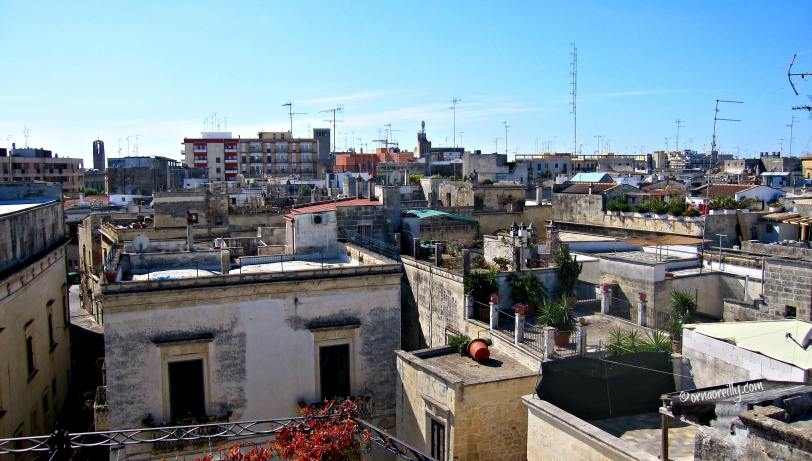 A gigantic church dominated the horizon, looming over all the surrounding buildings and Elisabetta told me that it was the church of San Matteo.

San Matteo from my rooftop hideaway

My room was comfortable and cosy. Breakfast had been cleverly provided for in the shape of a basket full of goodies – more that I could possibly eat – plus a fridge full to bursting with fruit, yoghurts and juices. I was in heaven! 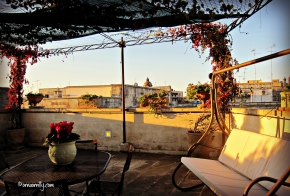 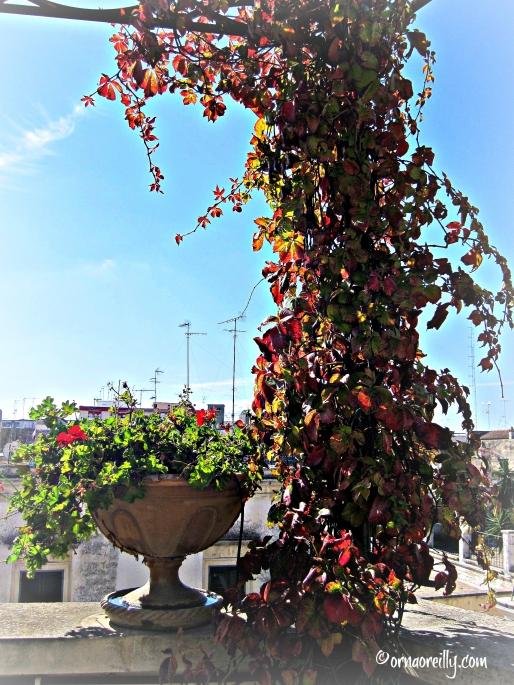 Taking to the streets was quite an experience. They are paved with marble and everywhere you look there is a proliferation of baroque decoration. 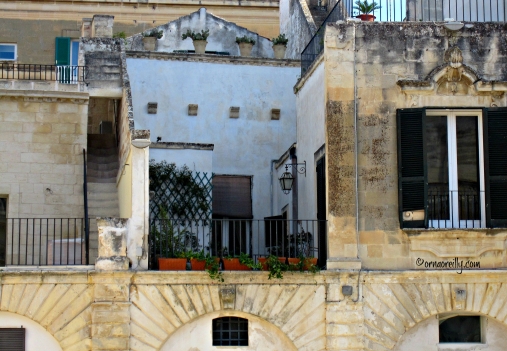 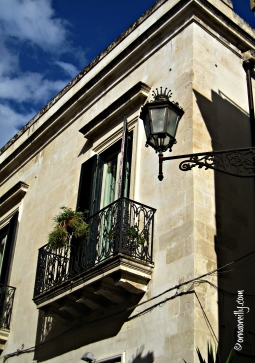 I consulted my map and decided to head to see the famous church of Santa Croce. On the way, I popped into the aforementioned looming church of San Matteo and marvelled at its lavish interior. 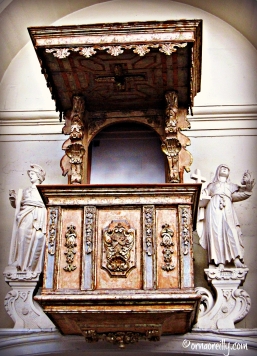 Santa Croce was next and I just could not believe the amount of decoration adorning it. 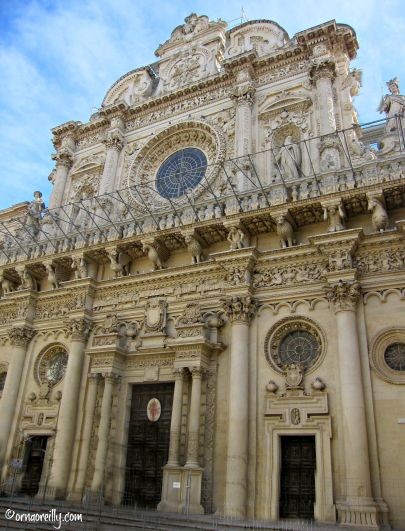 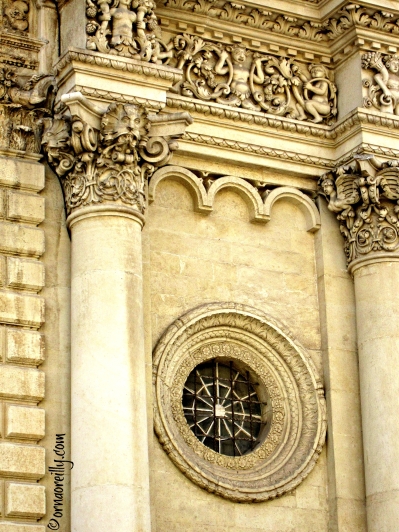 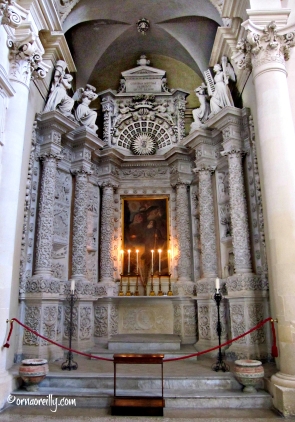 Wandering the streets of the centro storico was fascinating. I strolled through one of the city gates to have a look at a market sheltered beneath the old walls. Unfortunately, it was being dismantled when I arrived and the main spectators were the pigeons who crowded the parapets along the wall.

Over my two days there I visited the Teatro Romano, the Basilica del Rosario and Lecce Cathedral. I also made a point of visiting the Duomo in its large piazza by night. 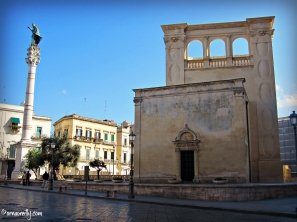 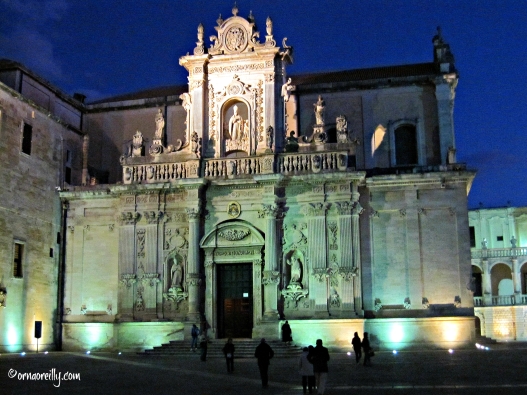 Lecce, known as “The Florence of the South”, seemed to be full of students, which added to the lively, youthful atmosphere. I felt perfectly safe strolling around after dark. 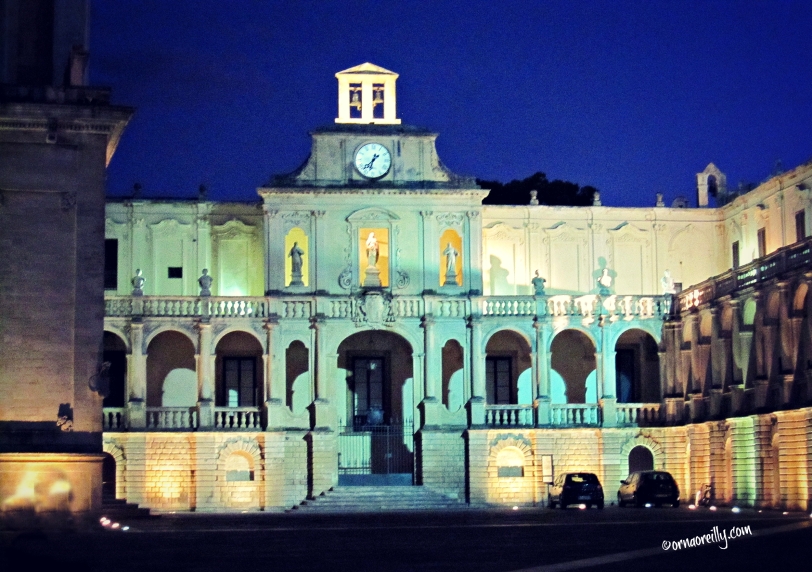 A wonderful city and well worth a visit.

How to get there: I flew with Ryanair from London Stansted to Brindisi and hopped on a shuttle bus to Lecce, which took about an hour. Ryanair flies into Brindisi from the UK and many other hubs in Europe. They also fly from Dublin to Bari, which is a bit further north. Most airports in Italy have flights to Brindisi too.

11 thoughts on “Two Days in Lecce”