Summer in the Dolomites: A Walk Around Lago di Braies

Glistening in the sunlight like green glass, Lago di Braies is probably the most beautiful lake I have ever seen.

Situated within the natural park of Fanes-Senes-Braies, Lago di Braies (Lake Prags in German) was definitely on my agenda when a visit to the Italian Dolomites was planned this year.

In early September, Tom Weber, The Palladian Traveler, and I stayed in Villabassa, a charming little town in the Alta Pusteria area of South Tyrol. We were there as guests of Christian Pircher of the Hotel Adler who was encouraging us to try some of the many summer pursuits available there. Walking, cycling and mountain climbing provide a sharp contrast to the highly popular settimana bianca (white week), when skiers assemble from all over the world in the popular resorts which dot the region.

“Go for a walk around Lago di Braies!” suggested Christian with his usual enthusiasm. “It’s the Pearl of the Dolomites, and will just take you a couple of hours.”

Next morning, accompanied by Germano, an equally enthusiastic member of staff at the Hotel Adler, we headed off in his tiny Fiat, with me bundled in the back while the men sat up front. In about twenty minutes, we arrived at the car park near the Hotel Lago di Braies and began our walk. 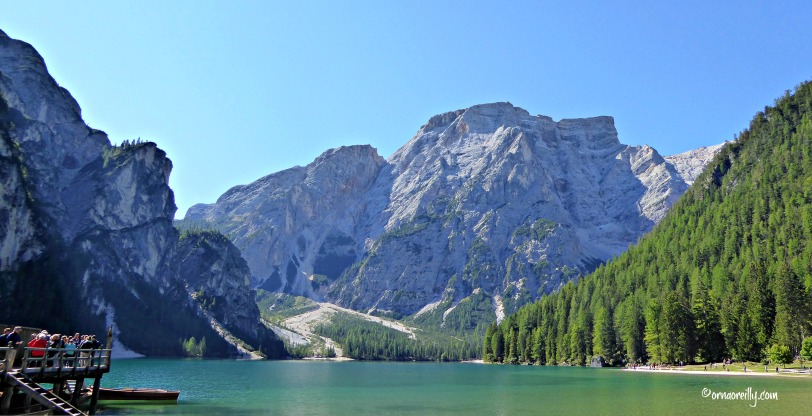 As we commenced our trek along the path that circumnavigates the lake, we could see that a wooden house on stilts was attracting a lot of attention. 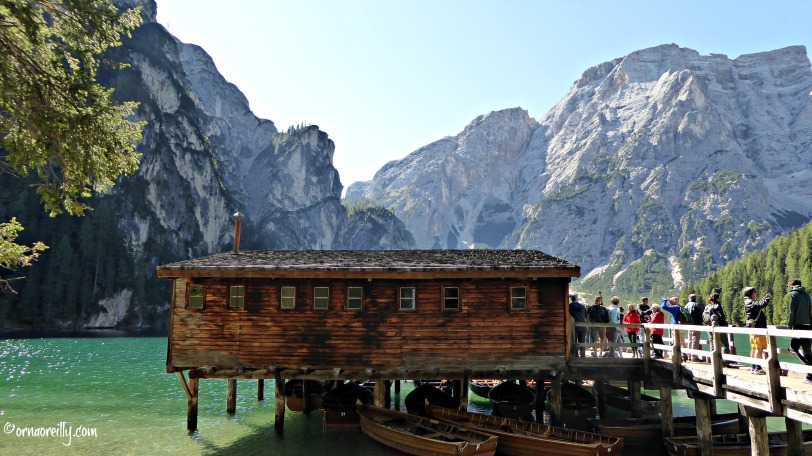 Apparently, a popular Italian television series was filmed here called “Un Passo dal Cielo” (One Step from Heaven) with Italian movie legend Terence Hill. It’s an action-packed adventure series about a forest ranger and here’s a promotional video clip worth a look, which shows the lake and Tre Cime di Lavaredo to perfection and gives some idea of the incredible beauty of the location: One Step from Heaven.

Lago di Braies is the largest natural lake in the Dolomites. It covers an area of approximately 31 hectares, is 1.2kms long and about 350 metres wide. It is also one of the deepest lakes in the South Tyrol and has become a popular tourist destination.

In fact, there were quite a lot of people there and, as this was in September, I can only begin to imagine how busy it must be in the height of summer. 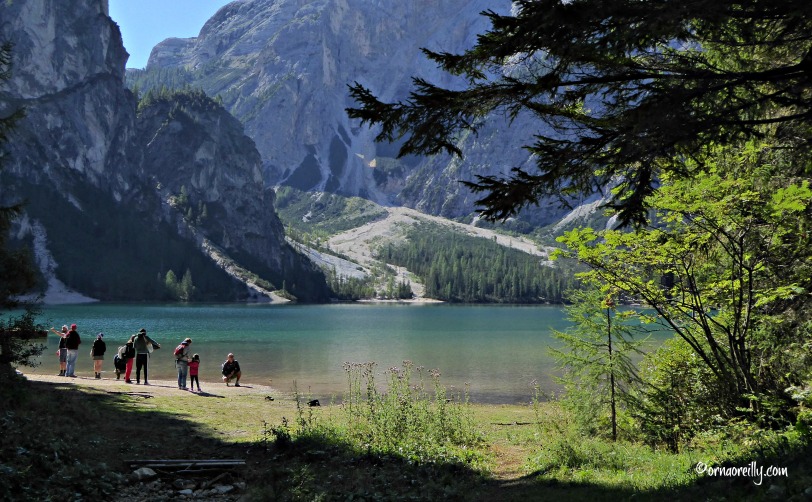 We circumnavigated the lake in an anti-clockwise direction, enjoying the towering Dolomites overhead and a glimpse of a pretty church nestled among the trees. 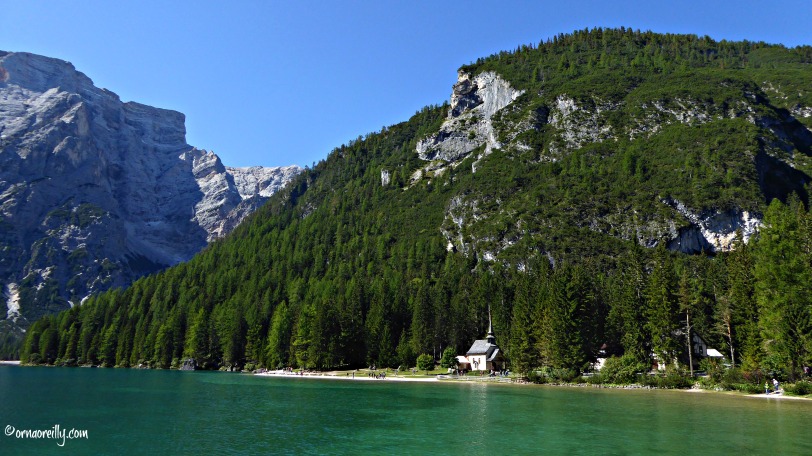 The path was flat and easy with many families enjoying a day out. I believe that in winter the lake freezes over completely and it’s actually possible to walk on it. 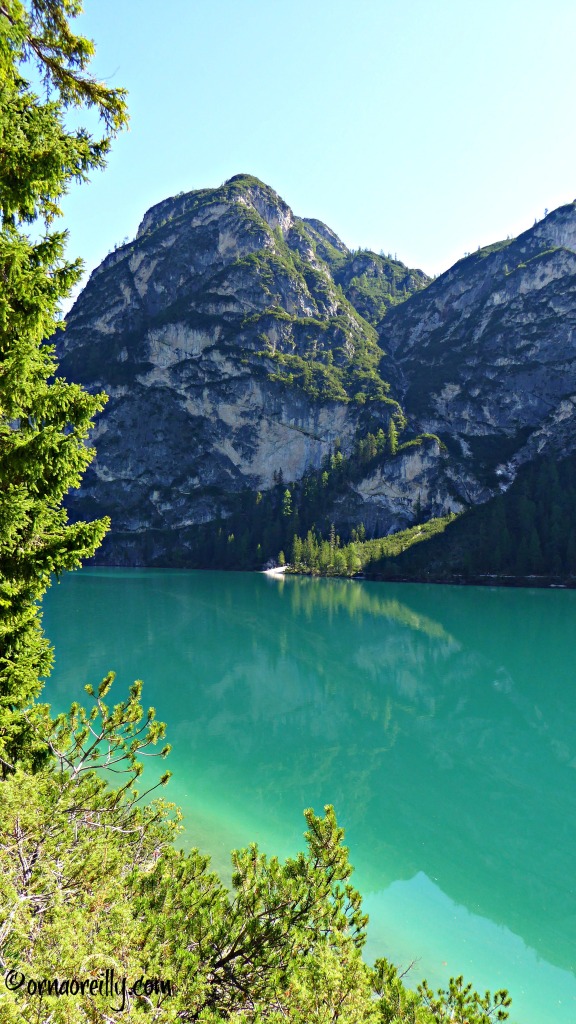 About half way around the lake we took a detour to a wide grassy area called the Malga Forest. A sprinkling of cattle grazed and dozed in the meadows. 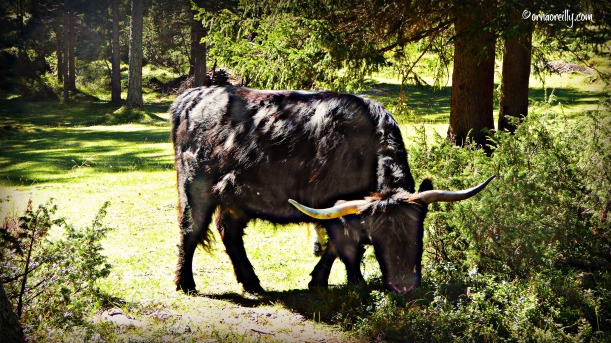 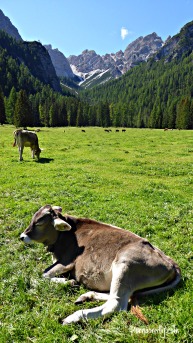 Here we had lunch at a rifugo called Grunwald Hutte, where the fare was simple, local and hearty in magnificent surroundings. 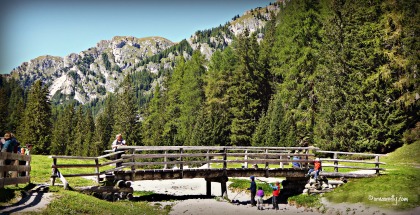 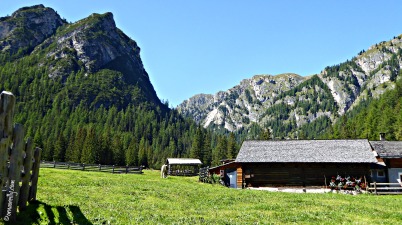 I had speck and cheese, while the menfolk enjoyed sausages, cheese, polenta and sauerkraut, all washed down with a glass of Lagrein. As you do! 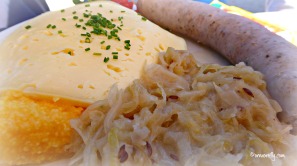 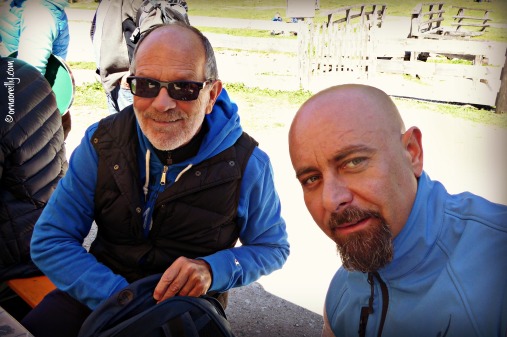 Re-joining the main drag once more, we traversed the narrow trail on the eastern shore, which had several steps cut into the mountainside. Still, the walking was fairly easy and no great level of fitness was required to enjoy this very satisfying hike while admiring the Pearl of the Dolomites in all its considerable splendour.

16 thoughts on “Summer in the Dolomites: A Walk Around Lago di Braies”