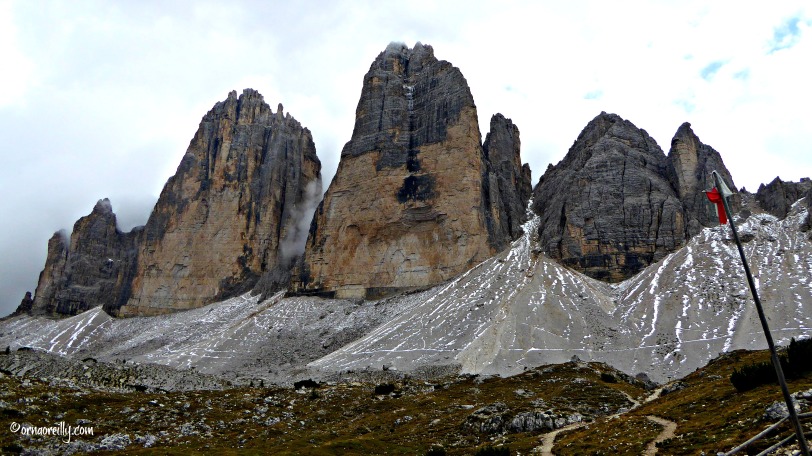 In the eastern area of the South Tyrol, where Tre Cime di Lavaredo rise iconically from amongst the jagged Dolomites of northern Italy, the Alta Pusteria is one of the most beautiful places on earth. 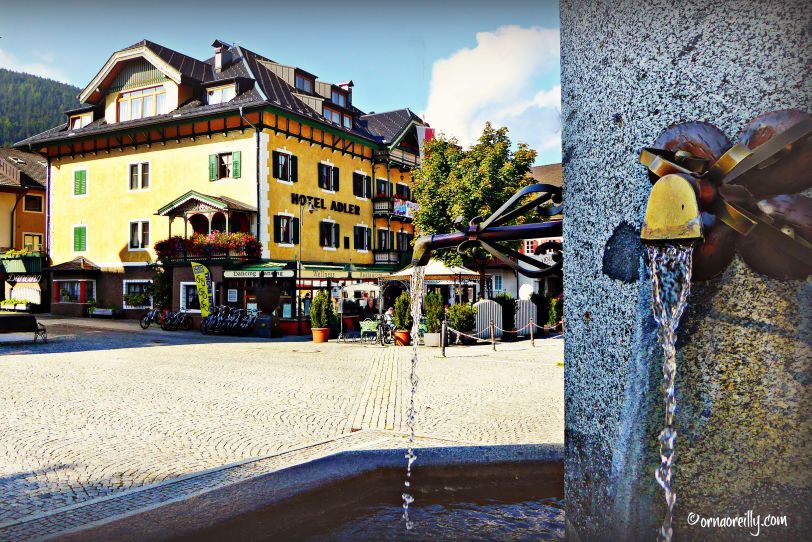 When Christian Pircher, owner of Hotel Adler in the town of Villabassa, invited me and Tom Weber, The Palladian Traveler, to come and see what the Alta Pusteria has on offer during the summer, we happily accepted.  All we had to do was to participate in as many feasible summertime adventures as possible, taste lots of wonderful wine and food and visit typical local artisans to sample and discuss their various products. No problem!

Villabassa is a typical Tyrolean town with a fast-flowing river rushing through the centre. 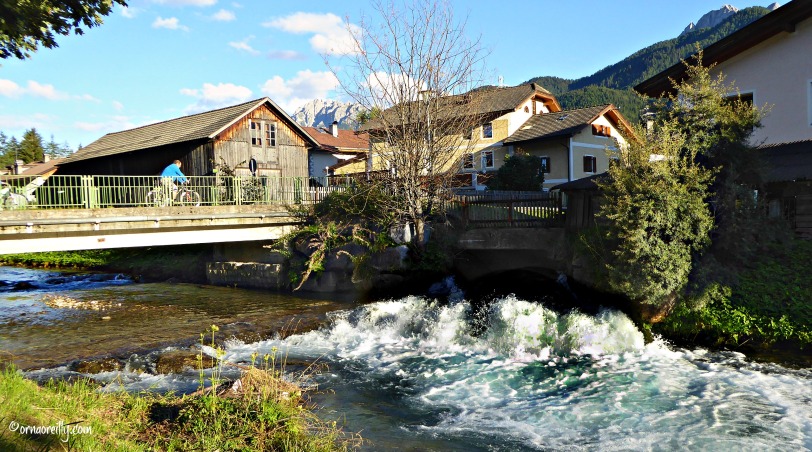 At the Hotel Adler itself, the food and wine is superb, as the kitchen is expertly run by Helene Markart, who has even written her own recipe book, Kitchen Magic of the Dolomites.

The Hotel Adler is very comfortable with its Tyrolean oak-filled décor. There is a lounge with an open log fire in winter and the bar and restaurant are truly inviting. The bedrooms are immaculate and there is a heated pool and spa too.

You can read about our various activities that week which included my hair-raising adventure while circumnavigating the Tre Cime of Lavaredo, our 42 kilometre bicycle ride to Lienz in Austria and the traversing of Lago di Braies.  Our visit to the local jam factory, artisan speck maker and dairy foods producer are covered too.

Now, last but not least, let me bring you to meet Brunhilde, whose herb farm in the mountains captured my imagination.

As we drove towards Perca, I could see how a herb farm could flourish amongst such pastoral beauty.

Tom and I soon arrived at a huge log chalet deep in the mountains. The signboard announced it as Kräuterhof Hauser. A family of gnomes in colourful costumes sat on a rock close to the front door and a children’s playground was visible.

We could not help but admire the hefty beams which had been used in the construction of this big house and were still admiring them when we were greeted by the proprietor, Brunhilde Huber, who told us that it was constructed just six years ago using natural spruce logs which have been treated only with hot water.

Dr. Joseph Huber and his wife, the aforementioned Brunhilde, have been growing herbs here for twenty years and this house is now their headquarters.

Kräuterhof Hauser has a truly welcoming atmosphere, with the scent of aromatic herbs in every room. 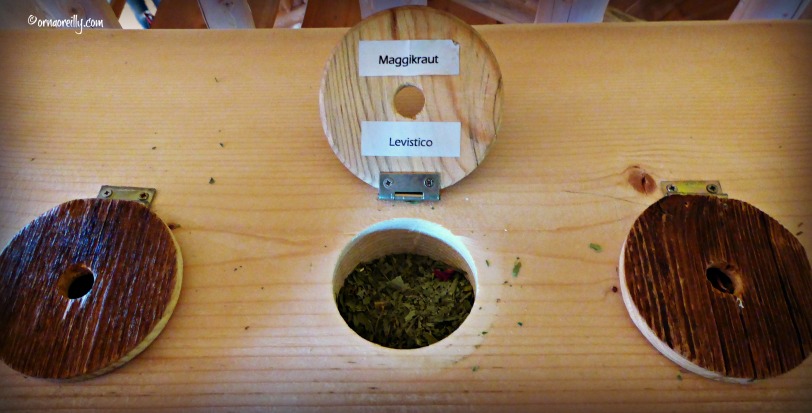 According to Brunhilde, this area of the Dolomites is full of fables and legends, with many archaeological discoveries on the farm too. Nearby is, apparently, an ancient stone in the shape of a head which was used as a calendar for thousands of years.

Brunhilde was an interesting lady who obviously loves the holistic world of herbs, with some old-fashioned magic thrown in. She spoke about how, in medieval times, women who used these herbs for medicinal purposes were labelled as witches and burned at the stake. She has a dedicated witches’ room, which I found both colourful and fascinating.

In fact, the entire house was filled with magic spaces. 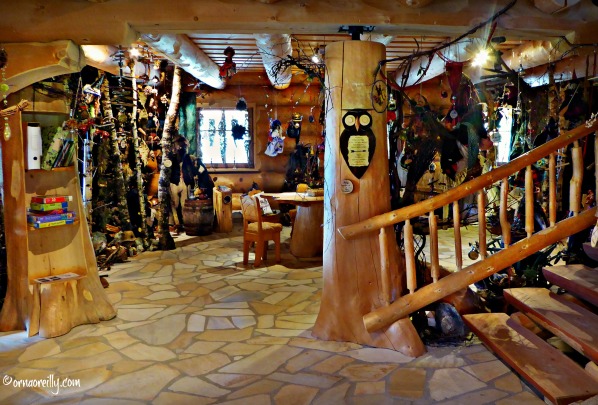 This biological herb farm is spread over the side of a gentle slope in the mountains behind the Huber family’s large log cabin. It is in an idyllic location, completely quiet and peaceful; a perfect place to grow herbs holistically. 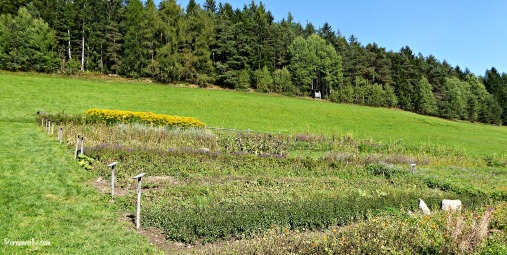 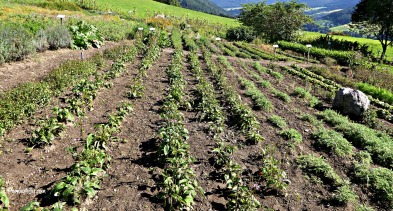 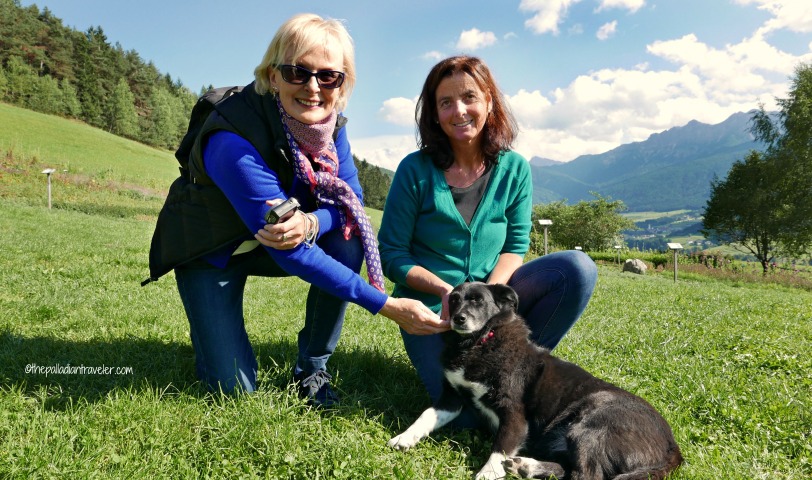 The farm has a fragrant shop and also sells on line. The products for sale are manufactured from the more than 50 types of alpine herbs grown here. Brunhilde told us that their products are made from carefully chosen herbs that are biologically grown. 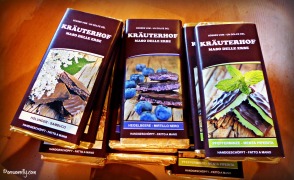 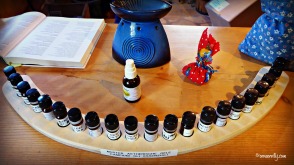 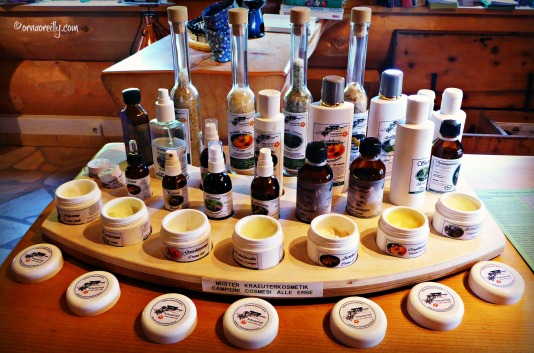 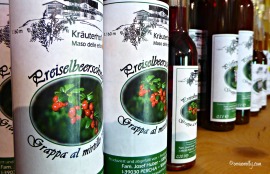 The grappa is made right there on the premises.

Bidding our farewells, with a couple of bottles of raspberry and apricot liqueur to add to our treasure trove of Tyrolean goodies, we returned to Villabassa realising that we had certainly spent a most interesting couple of hours with the lovely Brunhilde in her magical herb garden. 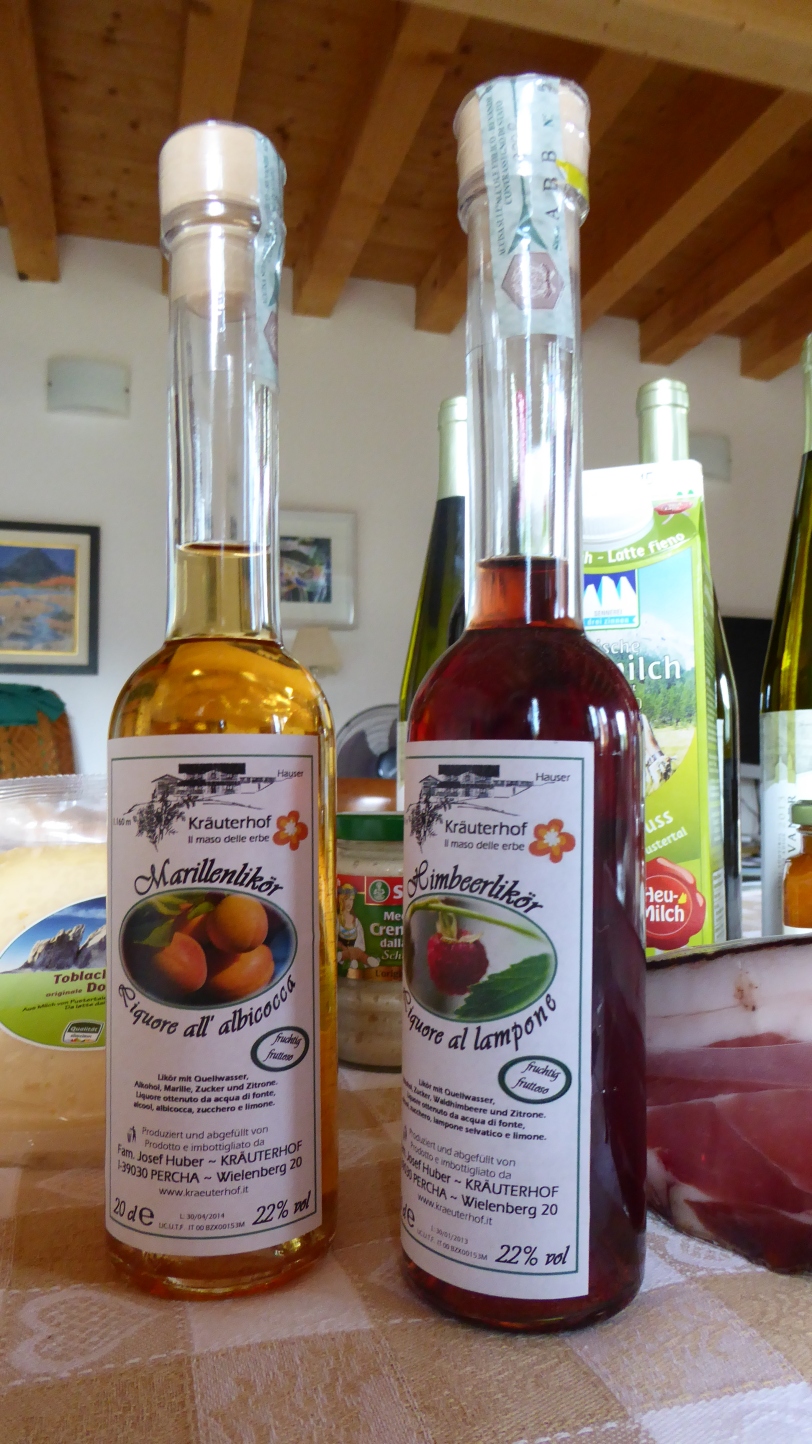 For full details on Kräuterhof Hauser click HERE. This herb farm is located at Wielenberg/Montevila in Perca.