A Day in Venice: From Tintoretto to Bardolino

Arriving in Venice on a cold winter’s day, I was looking forward to attending a wine tasting courtesy of Venice Events.

Gliding across the Ponte della Libertà on the train into Santa Lucia, the railway station, I looked out over the wintry Venice Lagoon and, as always, revelled in my good fortune in living just a quick train ride away from La Serenissima. 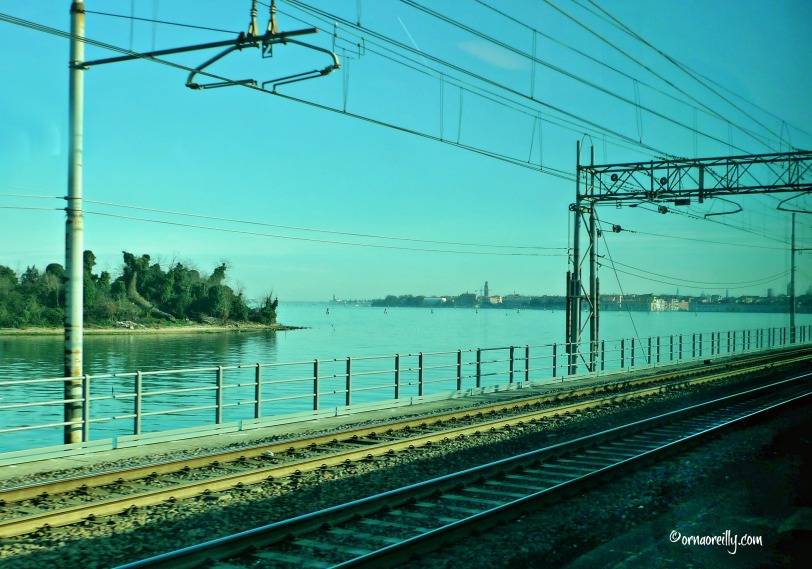 I had planned my day carefully, making time for a long-overdue visit to Scuola Grande di San Rocco and to the famous church of Santa Maria Gloriosa dei Friari, both of which happen to be within easy walking distance of the station.

Strolling through Venice on my way towards the Rialto, I admired the general activity on the Grand Canal. 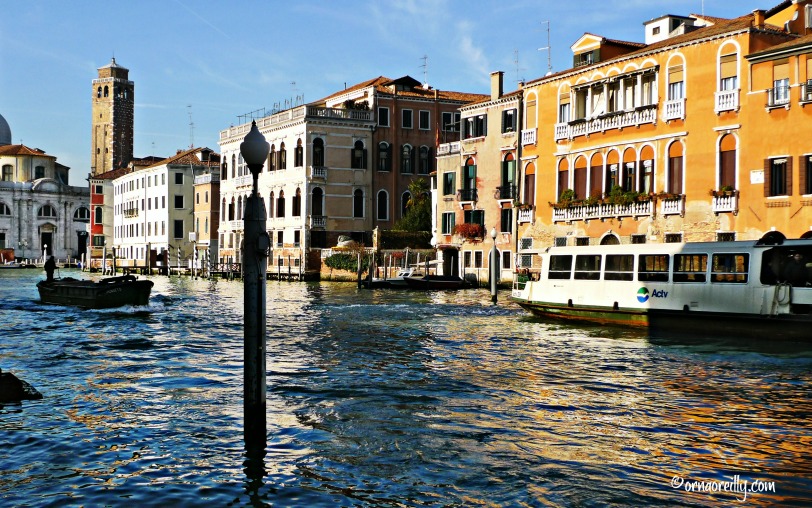 As the wine tasting was scheduled for 17.30 and I had arrived in Venice at lunch hour, I had plenty of time for a cicchetti and an ombra to get my Venetian day off to a good start. 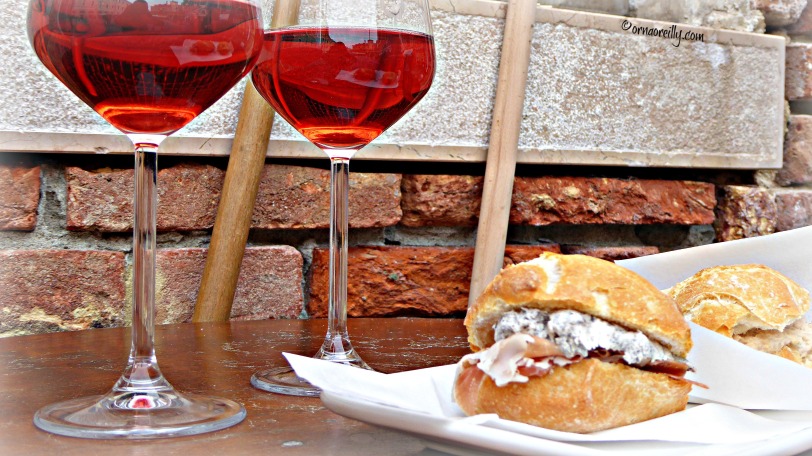 Arriving at Scuola Grande di San Rocca, situated in Campo San Rocca, not far from the Rialto, I found that I was the only person there, barring a few members of staff and the man on the ticket desk.

This beautiful building, which dates back to the 15th century, houses a huge collection of paintings by the famous painter Jacopo Tintoretto.

Wandering around unimpeded by the usual crowds of tourists one can expect at any famous Venetian destination, I was able to take in the entire building in a completely relaxed fashion. 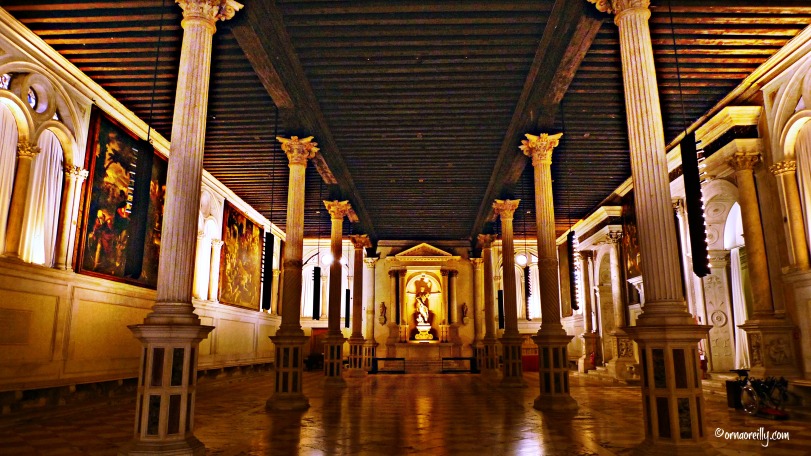 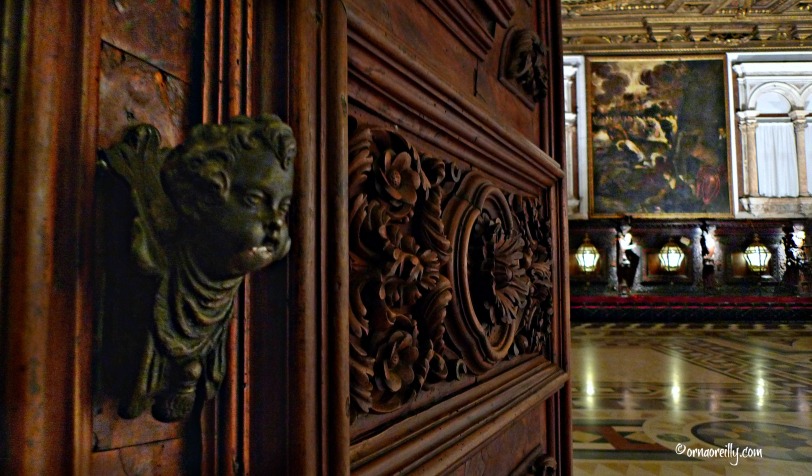 For those who are interested in Venetian art, this gallery is an absolute treat and a must-see. Lavishly painted by Tintoretto, it is beautifully maintained and restored.

For full details, you can visit the website of the Scuola Grande di San Rocca HERE.

I then wandered across Calle Tintoretto to the Church of San Rocco which is a perfect jewel. 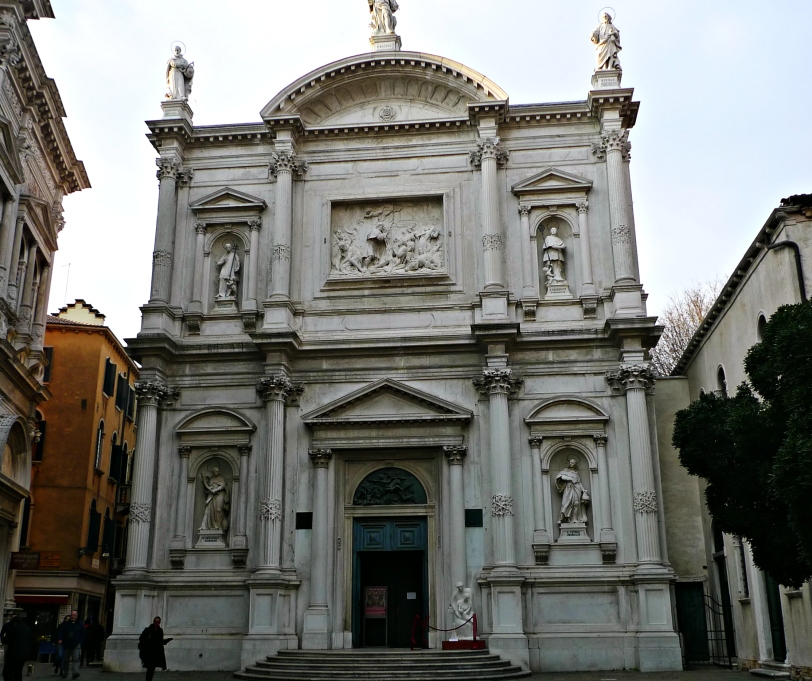 It was, apparently, built between 1489 and 1508. However, the façade was constructed during the 18th century and is built in the same style as the Scuola Grande across the campo. 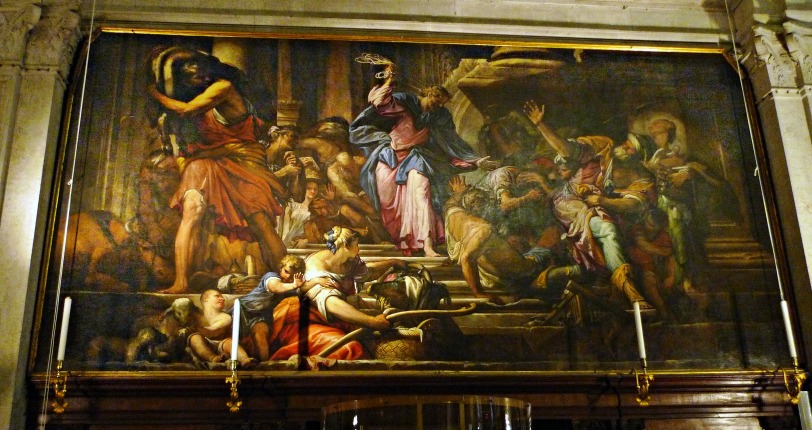 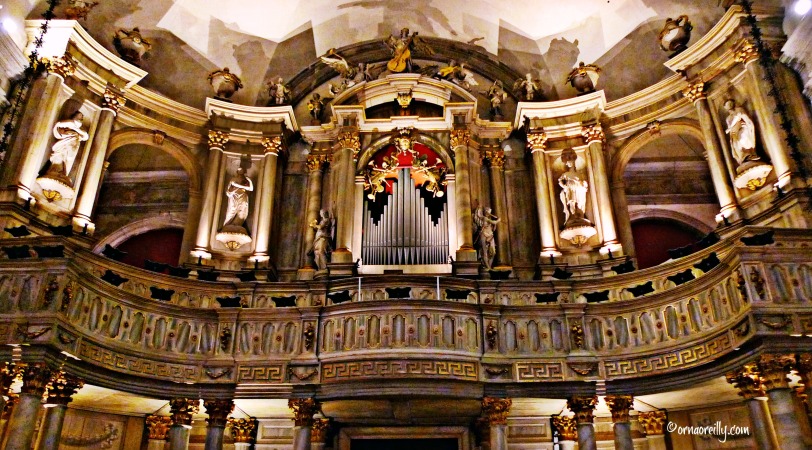 Around the corner, in the Campo dei Friari, is the enormous Santa Maria Gloriosa dei Friari, one of the largest churches in Venice. 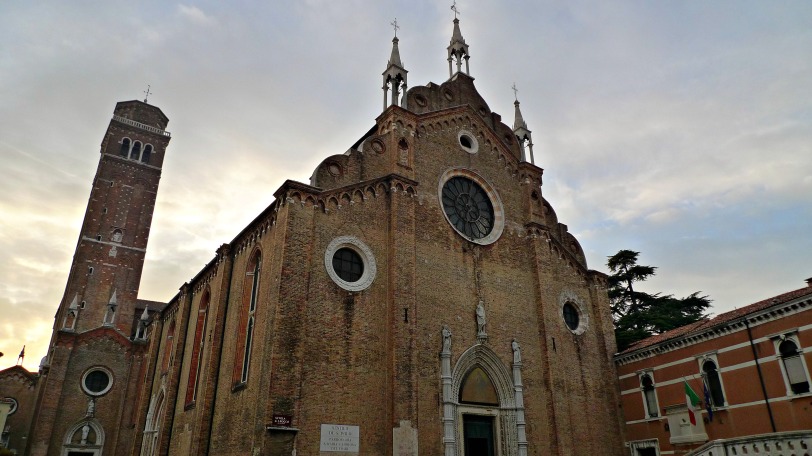 The Fransciscans built this church during the 14th century, but a hundred years later it was greatly enlarged and the campanile (bell tower) is the second largest in Venice. The Friari is built of brick and in Italian Gothic style.

The important 16th century Venetian painter, Titian, is interred in the Frari and there is an impressive monument in honour of the neoclassical sculptor Antonio Canova.

I was particularly impressed by the magnificent choir stalls, glowing gold in the late afternoon light.

Having enjoyed my cultural sojourn in the San Polo sestiere (district) of Venice, I strolled the alleyways south of the Rialto until I found the enoteca (wine bar/shop), Bar Estro, where the wine tasting was to take place. 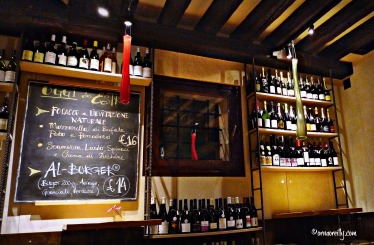 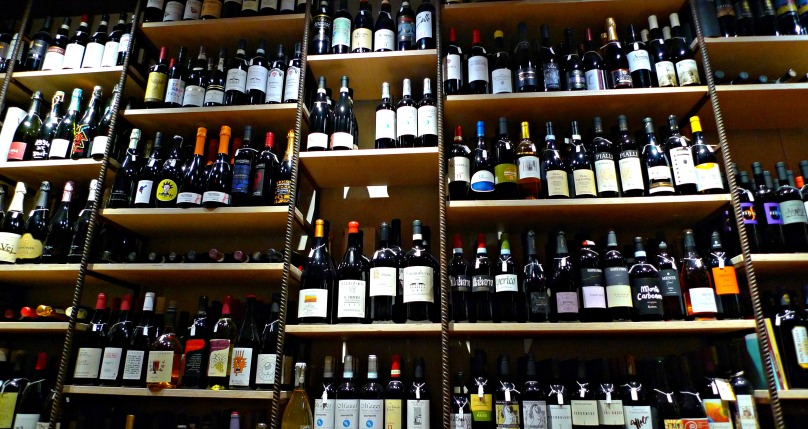 Being off season, there were no tourists there to join me for my evening sampling of the local Veneto wines on offer. Dario, the barista, was very informative and my tasting came complete with a detailed description of all four wines. 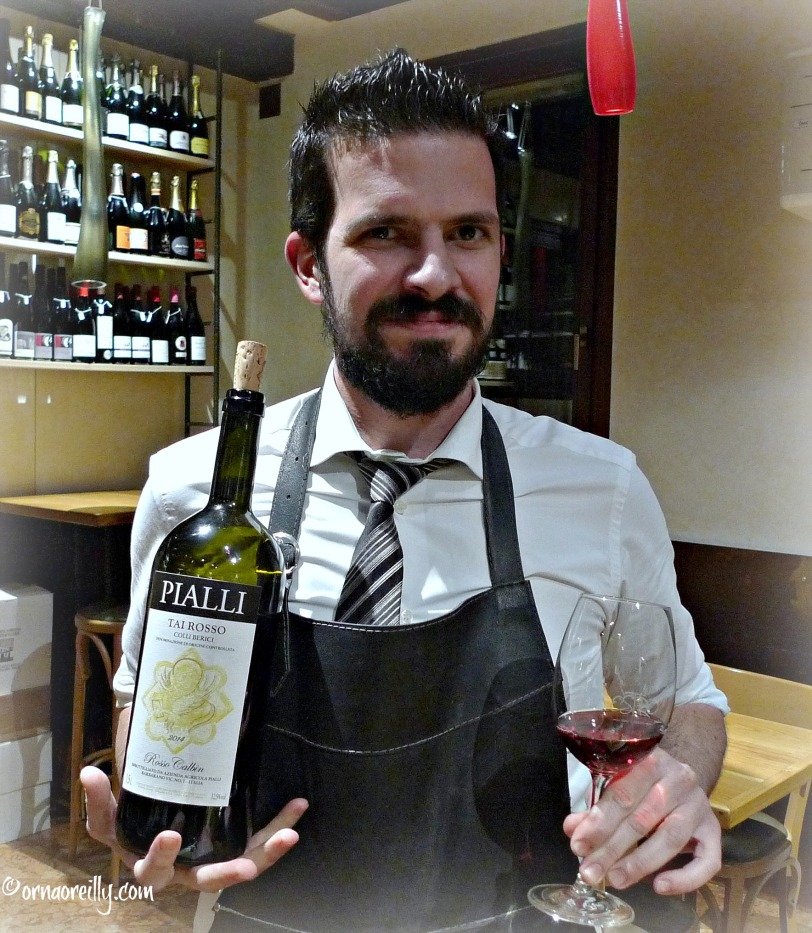 Dario told me that all the wines I would taste were biological, in other words, no chemicals had been used in their making.

The first wine I tasted was a Mongarda. This is a lovely, dry, sparkly frizzante/prosecco made from the Glera grape.  A great wine to have as an aperitivo. 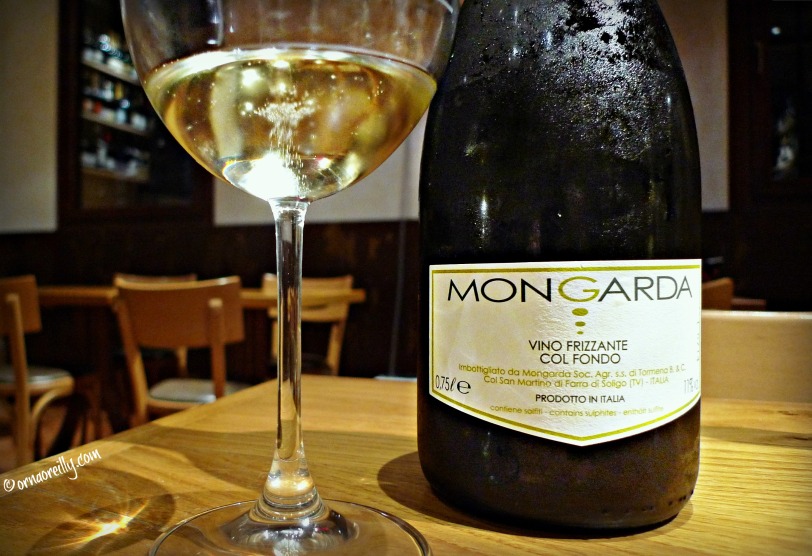 The second wine tasted was a very palatable 2014 Soave from Fasoli Gino. 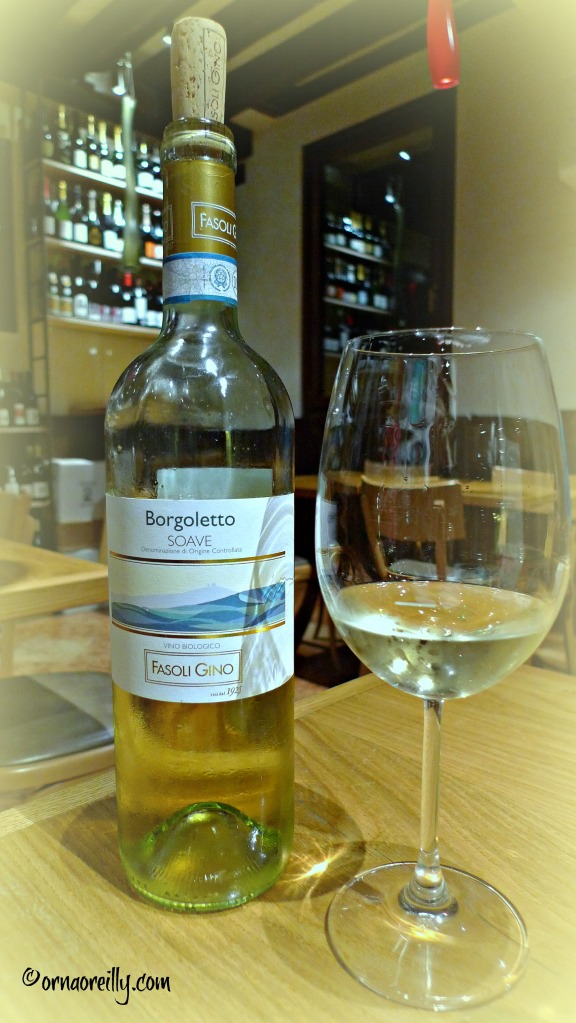 After the tasting of Soave, I was offered a plate of four cicchetti, the typical Venetian tapas-style snack.

My third tasting was of a good red Tai Rosso. This is a 2014 Grenache, Rosso Calbin DOC. It is from Agricola Pialli in the Colli Berici, near Vicenza.

Best of show, hands down, in my opinion, of the wines tasted was the fourth and final tasting of Villa Calicantus Bardolino Superiore DOCG. Villa Calicantus is an agriturismo (farm to fork, B&B) from Bardolino on the magical shores of Lake Garda. For further information click HERE.

Bidding a final farewell to Dario and the staff at Bar Estro, I began my walk down the myriad dark Venetian calli (alleyways) on my way back to the station. On my train back to the Colli Euganei and home, I reflected on my very satisfying day of culture and wine in the city of Venice, where there is so much to see and do.

12 thoughts on “A Day in Venice: From Tintoretto to Bardolino”