Puglia: When the Wind Blows

The car is ready to roll, packed with deckchairs, towels, hats, sun cream, books and a large cool-box. The summer sun is climbing high into the impossibly blue sky. We’re off to the beach. But which beach? I check the direction of the fluttery sea breeze. From the north? Right then, we’re off to one of the gorgeous beaches along the Ionian Sea. As they say in Puglia: ‘Va ‘dove ti porta il vento’; ‘Go where the wind takes you!’

As we drive along the narrow roads lined with rough stone walls, we spy many trulli poking their cone-shaped heads through the olive trees . The crickets are chirping loudly in the undergrowth as we leave a long white trail of dust behind us on our ten minute journey to the main road and turn the car towards Taranto and the Ionian coastline. 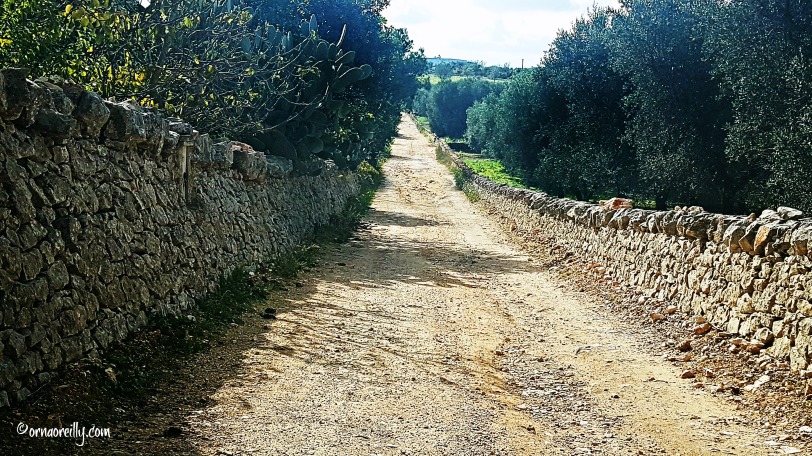 It’s pretty breezy here all year round. In summer, gentle puffs of wind tickle the olive groves and cool the vineyards. In winter, especially in January, these same winds can become fairly chilly and there can even be the occasional flurry of snow.

Puglia is a region which reaches from north of the hilly Gargano peninsula right down to the ‘stiletto heel’ of Italy’s iconic boot-shape.  This includes the Salento, which comprises most of a long, narrow peninsula beginning around Ostuni to the east and Taranto to the west. It is not much more than 50kms wide and is surrounded by stunningly beautiful seas which appear to change colour from day to day.

The Salento peninsula has the Adriatic Sea on the east and the Ionian Sea on the west, with the popular holiday area of Leuca on its southernmost ‘heel’ where the two seas embrace.  As it is mainly flat, without a single mountain on the horizon, the moist sea breezes blow unobstructed from one direction or the other.

When choosing where to spend some time on the beach the direction of the wind needs to be taken into consideration. I had no idea that this was the case until I began visiting this beautiful part of Italy on a regular basis and began building a new home among the olive groves of the Valle d’Itria, close to Ostuni, where the Salento begins its journey south. Luckily, the house is in a slightly elevated position on the spine of the Alto Salento, almost equidistant from both seas and benefitting greatly from the cooling breezes in summer.

When the wind blows, it most likely to be the Tramontana. This is the fresh, cool wind that comes from the north/north east and means ‘from across the mountains.’ It blows down along the Adriatic coastline from the Alps.

During the summer months, when the Tramontana sends puffs of cool, dry air from the north, head to the Ionian coast, where the seas around Gallipoli – both to the north and south of this lovely old town – will be pancake flat and calm.  At this hot, hot time of year, happily it is mainly this cool breeze that prevails.

However, during the winter the Tramontana often reaches a speed of 60 kilometres per hour and these winds can be very cold at times.

Secondly, there is the Sirocco. This is a warm, humid wind which originates in North Africa, causing storms in the Mediterranean Sea and cool wet weather in Europe, usually for just a few days at a time.  On the stiletto heel of Puglia, on the peninsula which comprises the Salento, when the Sirocco blows from Africa during the summer months the air becomes humid and big waves form on the Ionian coast.

As it stirs up the Ionian Sea, it simultaneously calms the Adriatic leaving the area around Lecce and Otranto flat and calm. So when the humid Sirocco arrives from the south east, you need to head to the Adriatic coast, where the seas will be placid and inviting.

This warm wind is the culprit that deposits lots of Sahara sand as it blows through; usually on your car at night.  I have been also been told that the Sirocco can affect one’s mood and not in a good way!

Sirocco winds can reach speeds of up to 100 kilometres per hour in spring and autumn and are most common during those seasons.

Apart from the two main winds, the Tramontana and the Sirocco, there is the Ponente, a warm dry wind which hails from the west and the Levante which blows occasionally from the east.

When the Ponente is blowing from the west, I have been told that it’s time to head south to the tip of the stiletto for calm seas.

I have heard it said that the climate of Puglia – and the Salento in particular – is ‘sublime’ and I would have to agree with that assessment. Hot as it can be there in the summer months, the cool breezes from the north usually keep things pretty pleasant.

In winter, once sheltered from the wind, on sunny days – and there are plenty of those – it is possible to sit out-of-doors. Lunch in the sun in January, consisting of perhaps a couple of bruschette topped with a mound of fresh, sweet tomatoes and olive oil, accompanied by a glass or two of the local vino, is quite a treat!

But, when it comes to the four winds of the Salento, it is not all about the beaches. Most of the Pugliese vineyards are, inevitably, close to the sea, as are the extensive olive plantations. Because they benefit greatly from the constant moist sea breezes, there is a rich abundance of olives, grapes, fruits and vegetables. With the emphasis on wine, olive oil, seafood and local produce, much of the tourism here is related to this, as it is where one can experience the true Mediterranean Diet. Cooking holidays are an excellent – and fashionable – way to experience Puglia and many of these also offer side trips and excursions, as well as wonderful accommodation in converted ‘masserie’ (farm house accommodation).

I have just moved to a new home near Ostuni with my husband Tom, whose blog The Palladian Traveler is now Puglia based. We are happy to know that when we want to go to the beach, all we have to do is wet a finger and stick it in the air to check the wind direction before setting off.  Time to throw the deckchairs in the boot of the car and go where the wind takes us.

13 thoughts on “Puglia: When the Wind Blows”