I have now been living in Italy for one whole year. I can hardly believe it has gone by so quickly! A fantastic twelve months; I have spent it settling into my little house, learning to speak Italian, organising my residency and meeting a brand new set of friends and neighbours. And, of course, learning about pasta shapes.

In fact, when I sat down to compose this little blog, I thought it would take me about ten minutes to write. Not so! Hours of research and raised blood pressure have gone into this brief overview of what I have learned about pasta shapes on behalf of the uninitiated. Recipe books have been pored over and the Internet has been plumbed to its very depths to bring you these essential words of wisdom.

Probably the most complicated component of Italian cooking, I have learned to my amazement that pasta does not just consist of the enormous variety of basic shapes available, such as spaghetti, penne and fusilli, but that what goes with them is of equal importance.

Having been gently chastised recently for putting a light fish sauce with bigoli, I have become aware that what goes with the different pasta shapes is, apparently, of vital importance.

On walking into my local supermarket, the rows of shelves devoted to different pastas is enough to turn your brain into macaroni, which, ending in –oni as it does, means it’s a thick pasta. Just as we all know about spaghetti; spaghettini is thinner and spaghettoni is thicker; it’s all in the ending of the word. Are you still with me?

As there are more than 500 varieties of pasta available, I should really have called this blog entry “Five Hundred Shapes of Pasta”, but it would probably have been less catchy. There are also umpteen different types of sauce; some thick for the thick –oni pasta and others thin for the -elli, -etti,  -ini, -ine ones.

As a result, I decided to try to break this blog into simple, swirling forkfuls of delicious information for the uninitiated.

When deciding on which pasta to use, you need to look at the sauce first. These sauces are creamy and/or cheesy; or are made from meat, fish, pesto or tomato.  Some turn out thick and others thin, such as puttanesca, which is made with anchovies, plus the perennial favourite, which goes with spaghetti: aglio, olio and pepperoncino (garlic, oil and chilli). The thick meat sauces (ragu) are better with larger pastas, as the shapes trap the thick sauces. 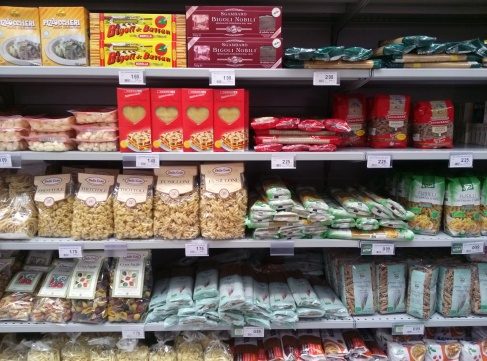 A popular dish here in Veneto is bigoli – a long, thick pasta – often served with duck ragù. The ragù sticks to the thick lengths of bigoli in a perfectly delicious way. Ragù is usually made from different types of minced meat and is usually simmered with vegetables, such as onions, carrots and celery. Long and thick fettuccini also works well with ragù.

Then there is linguine, which is thin, like flattened spaghetti and is usually accompanied by a thin meat or fish sauce and pappardelle, which is like a thick version of linguine, and takes a thick meaty sauce as a result.

When you see one of your favourite pastas with the word “rigate” after it, it means that it is ridged. That explains why penne can also be called penne rigate, as the sauce, apparently, sticks to the “rigate” better than to the smooth “lisce” sides. 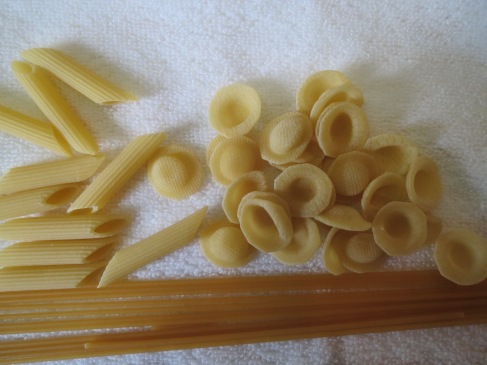 Then onto still more shapes: conchiglie are seashell shaped; farafelle look like little bow-ties and lumache are made to resemble snail shells. Orechiette are little ears, rotelle are wagon wheels and strozzapreti (priest stranglers) are rolled across their width.

On top of all of these, we have the traditional baked pasta dishes such as lasagne and cannelloni, while ravioli and toretellini are stuffed like little pillows. And who can forget gnocci: delicious potato dumplings that melt in the mouth when they are freshly made.

I am sure I won’t have managed to get everything quite right and will, very possibly, have made some terrible errors in this blog. So purists, please comment in a helpful way, by all means, but don’t give me a hard time; I’ve still got my Italian “L” plates up!

7 thoughts on “Fifty Shapes of Pasta”