Having been an interior designer in a previous life, I was greatly looking forward to a guided tour which would allow me to examine a host of medieval mosaics in Rome. Design and decoration from every time period fascinate me, so when Tom Weber and I were invited to join a group of fellow travel bloggers on a cosmatesque walking tour in Rome, I was delighted.

Arriving at our meeting point outside the Papal Basilica of San Giovanni in Laterano, we were met by the owner of Personalized Italy, Annie Ojile, and were introduced to our guide for the afternoon, Alessandra Segatori.

We were looking forward to seeing a vast selection of cosmatesque mosaics, courtesy of Personalized Italy, on a winter weekend in Rome organised by Linda Martinez of the Beehive Hostel close to Termini in Rome.

The Cosmatesque Tour consists of visits on foot to monasteries and basilicas containing interesting pavements designed in ‘cosmatesque’ style.  It is designed for anyone who has a keen appreciation of art and especially the art of medieval Italy. The word ‘cosmatesque’ means a style of decorative inlaid stonework derived from the name of a famous group of craftsmen called the ‘Cosmati’. It consists of mosaics made up of marble chips and glass worked in Byzantine style.  This colourful decorative statement is principally found in Rome, mainly on floors, but also on walls and altars.

Normally, the tour begins outside the Basilica di San Giovanni in Laterano (St. John Lateran) and we joined the group in the early afternoon as arranged. 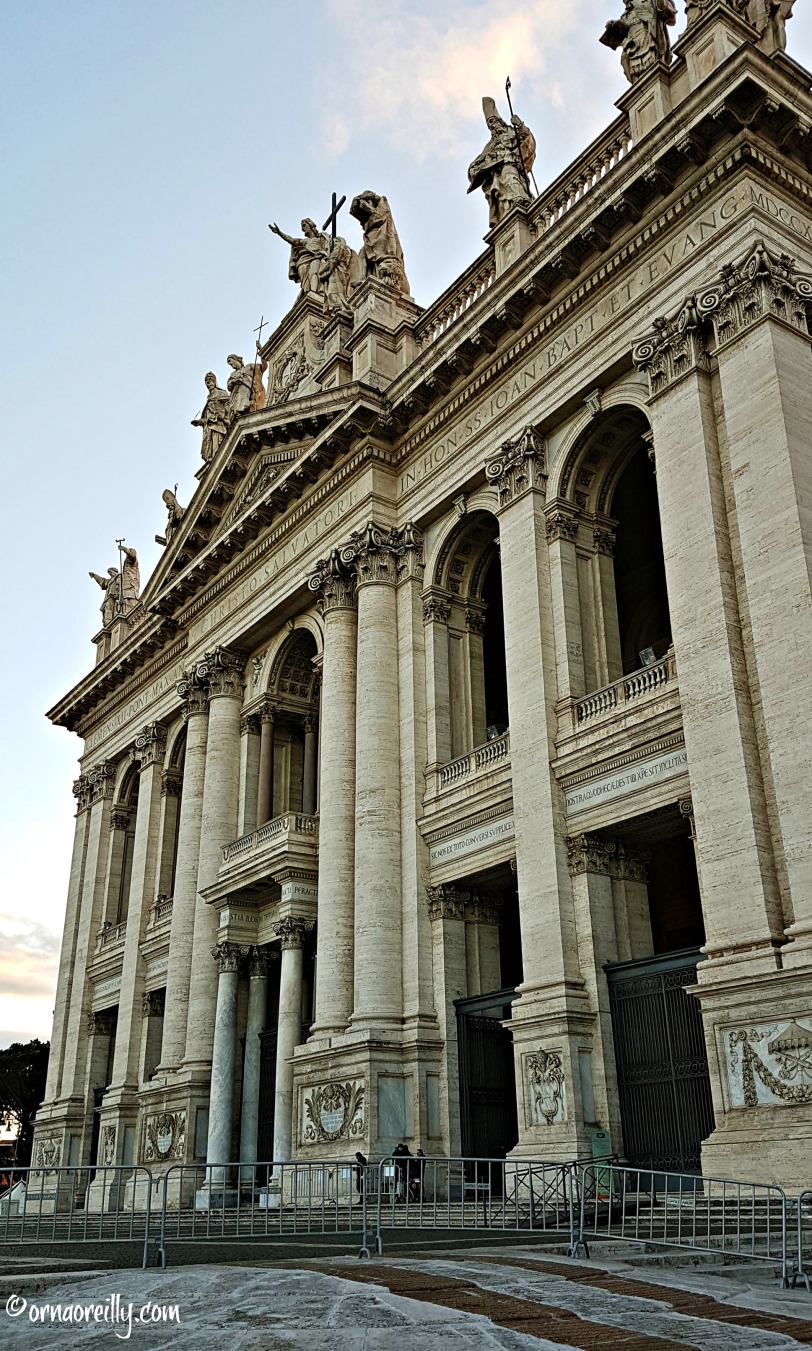 When we arrived, a huge queue, including hundreds of priests and nuns in billowing robes, was lined up waiting to enter. We were informed that we ourselves would be denied access to the Basilica as the Pope was about to say Mass. Nobody in Personalized Italy had been informed, as – apparently – one does not alert the faithful as to the whereabouts of Il Papa due to the possibility of unwanted crowds turning up unannounced.

Our guide was devastated. What to do? After a round-table discussion, it was decided to embark on the second half of the Cosmatesque tour first and return to San Giovanni in Laterano afterwards in the hope that the Basilica would then be accessible. 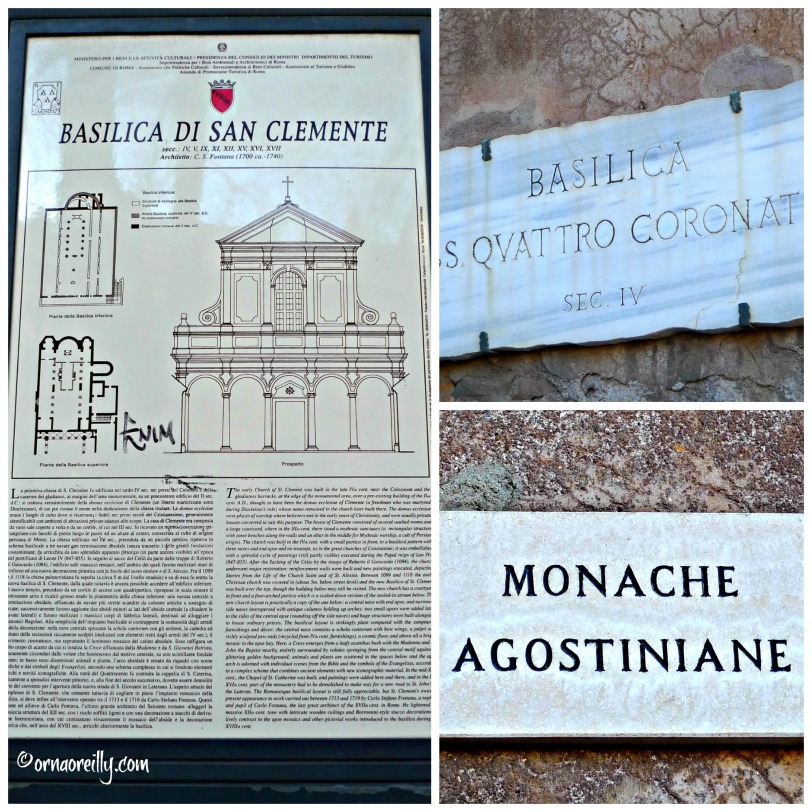 Heading off across the busy street we dodged into a side street and downhill to the Basilica di San Clemente. 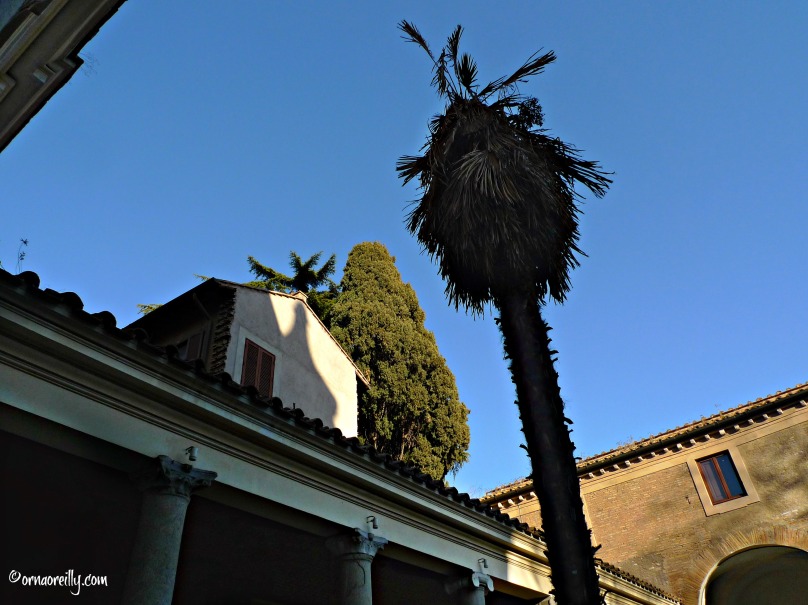 This basilica was dedicated to Pope Clement I and is now run by the order of Irish Domenicans.

This was an interesting church. When we entered, we were greeted by a calm, mossy cloister with a cistern in the middle. Unfortunately, we were not permitted to take photographs when actually inside the church. 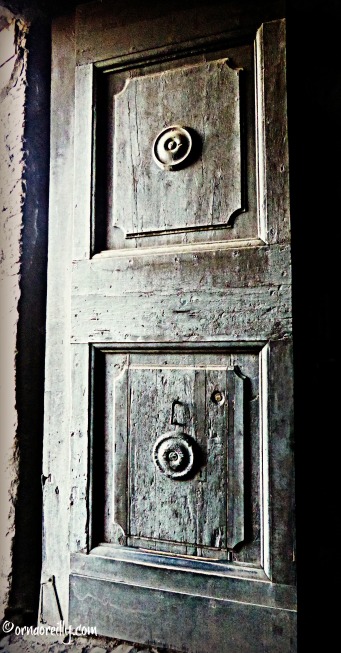 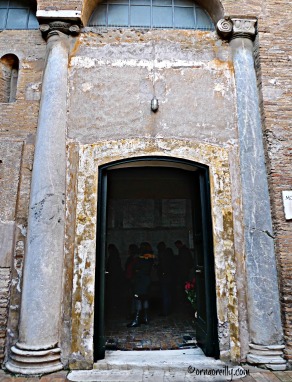 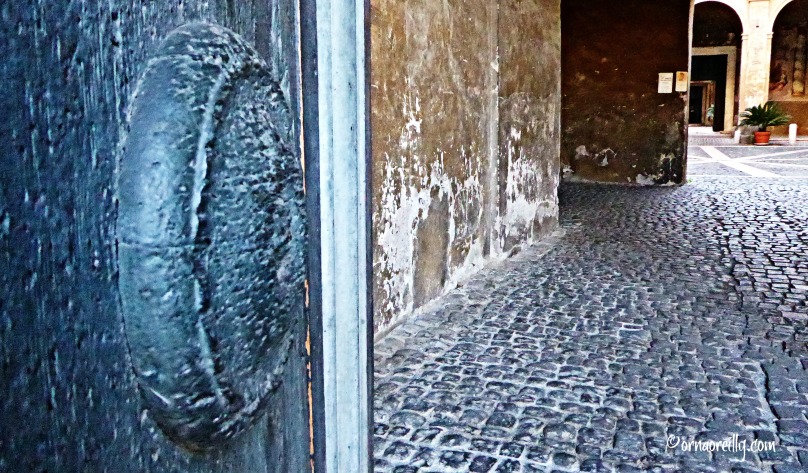 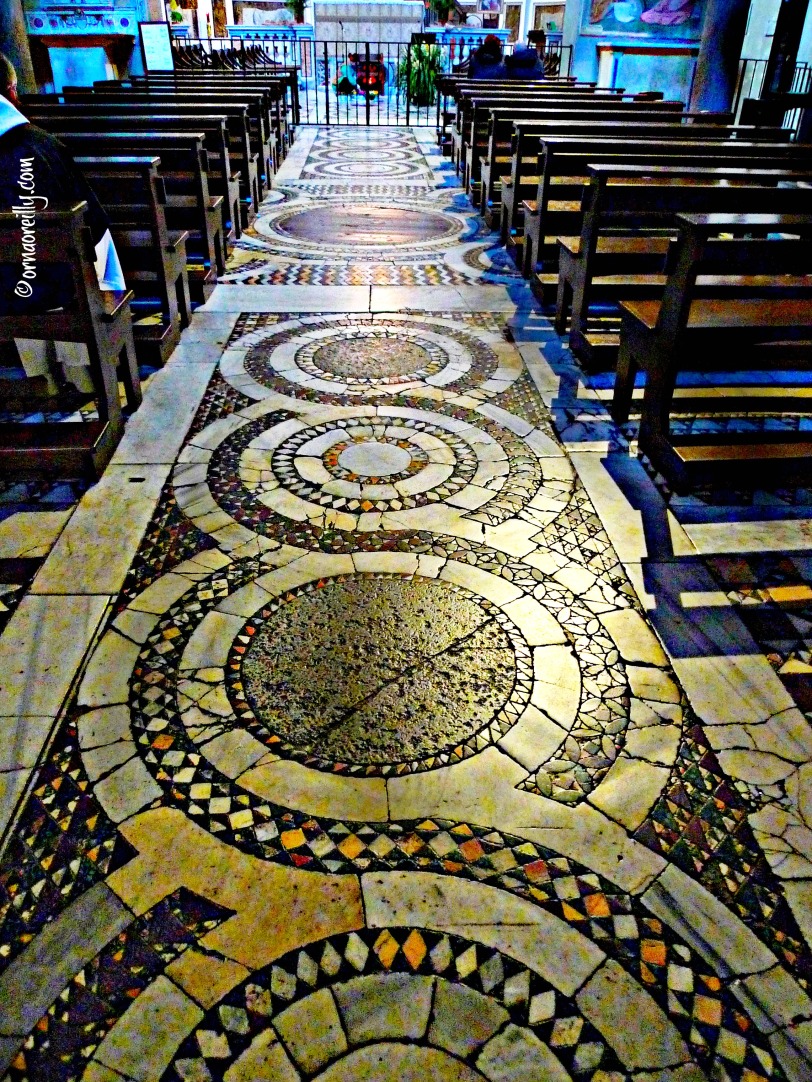 We then returned to San Giovanni in Laterano to see if we could enter, but no luck unfortunately; Il Papa was still inside. Our lovely guide Alessandra, who tried everything, including batting her eyelashes at the security guards to try to persuade them to let us in, failed in her heroic mission. So, after all these efforts, we were disappointed not to have been able to enter.

We then assembled across the street at the Church of San Lorenzo, which houses the Pontificio Santuario Scala Sancta (Papal Shrine of the Holy Stairs).

This was absolutely fascinating, as these are, apparently, the 28 steps that Christ himself climbed on his way to his trial under Pontius Pilate, brought here from Jerusalem by St. Helena in the 4th century.  These white marble steps are now covered in a protective layer of wood and lead to the Sancta Sanctorum, which means the Holy of Holies; the personal chapel of the early Popes.  It is forbidden to walk up these stairs on foot as they may only be climbed by the faithful on hands and knees. 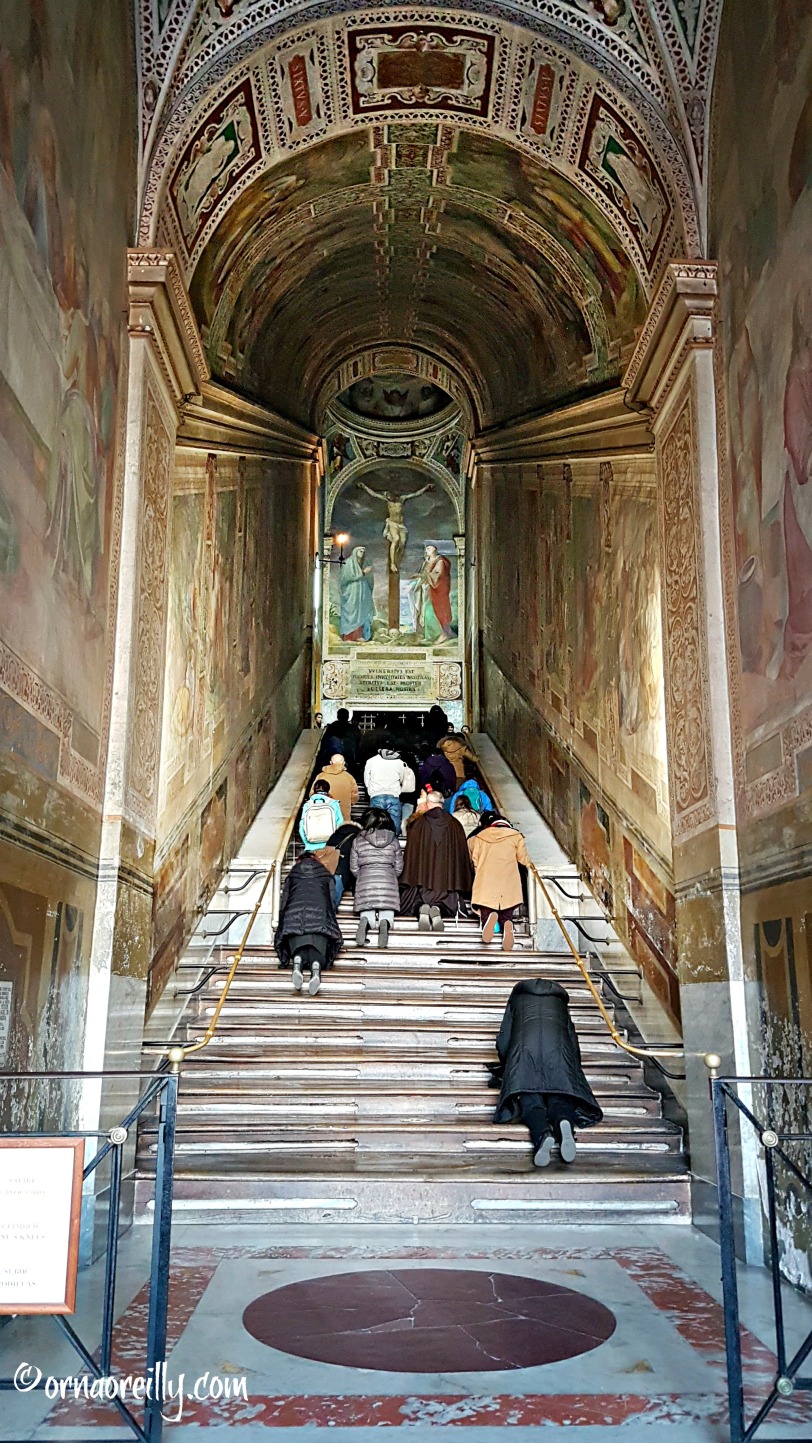 Climbing another set of stairs to one side, a curator opened a heavy door.

We entered the dim, atmospheric Sancta Santorum, where we sat and absorbed its silent history for several minutes. 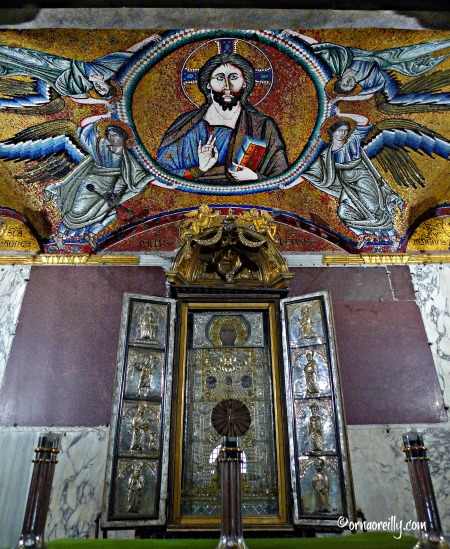 Strolling back to our hotel at the top of the Scala di Spagna (Spanish Steps) we were delighted to have participated in this highly interesting tour.

Personalized Italy organises bespoke holidays and exclusive tours in Italy, with their emphasis on Rome, Naples, the Amalfi Coast, Florence, Tuscany and Venice.

For details of this Cosmatesque Tour, visit their website or email them at hello@personalizeditaly.com They are also on Facebook:and Twitter